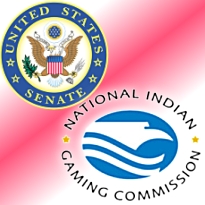 The US Senate Committee on Indian Affairs has released the witness list for its hearing on “Regulation of Tribal Gaming: From Brick and Mortar to the Internet” scheduled for this Thursday at 2:15 PM EST. Panel #1 will hear from Tracie Stevens, the chairwoman of the National Indian Gaming Commission (NIGC). Panel #2 will feature testimony from Bruce “Two Dogs” Bozsum, chairman of the Mohegan Tribe in Uncasville, Connecticut, and Glen Gobin, secretary of the Tulalip Tribes of Washington state. (Both Bozsum and Gobin testified at a previous Committee hearing on this subject in November 2011.)

The NIGC has released 2011 revenue figures generated by the Indian gaming industry. Using 421 audited financial statements submitted by 237 tribes with gaming operations, the NIGC says gross gaming revenues (GGR) rose 3% to $27.2b in 2011 – a new annual record and the first time annual GGR has risen since 2008, when revenues totaled $26.7b. Slightly less than two-thirds of gaming operations reported increased revenues in 2011, with 65% of these reporting growth under 10%.