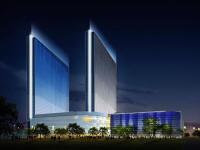 Despite a much hyped opening last April, Revel hasn’t gotten off to the kind of start it had hoped for. In the three months that it’s been open, the new hotel and casino has placed no higher than 8th in gambling revenue of all the casinos in Atlantic City.

The $2.4 billion casino opened in April and was expected to be the catalyst that leads to the rejuvenation of a gambling town that has taken a severe tourism pounding in the past five years. But after three months of being in business, Revel’s monthly revenues – $13.4 million in April, $13.9 million in May, and $14.9 million in June – hasn’t been enough to keep it out of the bottom third of the AC gaming revenue ladder.

But if there’s positive to take out of this, it’s that Revel has posted increased revenues in each of the three months, a trajectory the company hopes to continue in the coming months. Revel CEO Kevin DeSanctis also pointed out that despite the need for improvement in the casino’s gaming revenue, Revel’s doing very well in non-gambling revenue.

“We have a little bit different business model,” DeSanctis told The Associated Press. “Clearly, our gaming revenue has to improve, and it has been. We’re continuing to improve, and our non-gaming revenue – $8.5 million – is doing really, really well. In June it was up more than 25 percent.”

Even better is the fact that gambling revenue has increased 75% compared to the same time last month, signifying that the numbers it posted in its first three months of operation could have been less about its struggles to meet expectations and more about the casino still trying to break into a crowded market.

“It’s looking a little better every day, and in July, it’s going to be a lot better,” DeSanctis said.

As a new casino that’s still trying to get a foothold in Atlantic City, we’re not all too worried about the numbers Revel has been posting in its first three months. As far as we’re concerned, it’s not so much the monthly revenue numbers as much as it is showing steady improvement. That’s where Revel has been successful, and if they can continue on this trajectory, there’s a good chance that they can live up to all the hype bestowed on them soon enough.

How soon? No one knows. But it’s coming. And we’re confident that it will come sooner than later.