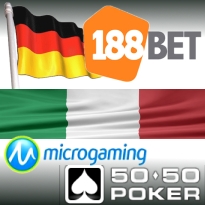 The first casualty of Germany’s new state and federal spots betting regime is Isle of Man-licensed operator 188Bet, which announced it will no longer accept German players effective July 4. Pending wagers placed before July 5 will be honored, but German player accounts will be closed July 18 and their balances refunded. 188Bet’s decision whether or not to file for a German sports betting license is currently “under review.” Recent amendments to the federal Race Betting and Lotteries Act call for the issuing of a maximum of 20 private operator sports betting licenses, to which a 5% turnover tax will be applied.

Italian gaming regulator AAMS reports that the domestic sports betting market took a steep drop in May. Total turnover was €300m, off 11.3% from the same month in 2011, although the football season finished earlier this year. Then again, the figure was also off 6% from 2010, another year in which the season finished early. Online wagering accounted for €94.2m of the total, down a comparatively light 3.3% from 2011, suggesting most of the real pain was felt at the retail level. More worrisome, projections for June’s numbers suggest Euro 2012 wagers will amount to €150m, a precipitous plummet from the 2008 tourney’s €211m tally – and this despite the 2012 Italian team progressing all the way to the final. SNAI remains the top performer with 30.6% of the fixed odds sports betting market, while Lottomatica is in second place with 20.8%, followed by Sisal with 13.2%. Lottomatica owns the lion’s share (30.4%) of the live betting business.

The Microgaming Poker Network has taken issue with the suggestion that former network skin 5050Poker used €150k of player funds to pay “fines” imposed by Microgaming. On Tuesday, the board of directors of 5050Poker’s parent company issued a statement to shareholders claiming that this misuse of player funds by management contributed to 5050Poker’s recent demise. On Wednesday, Microgaming issued a statement that these ‘fines’ were not fines at all.

“From April 2010 to June 2012, a system of reallocation of funds between Operators, called “Rake Reconciliation”, was used on the Network. Rake Reconciliation corrected the imbalance that occurs in a poker network ecosystem when rake is the only valuation metric … It is important to note that the reallocation of funds takes place between Operators within the Clearing House bank account, which at no time holds player balances from any Operator on the Network. [Microgaming] cannot access an Operator’s player accounts.”

Microgaming also took issue with 5050Poker’s claims that the reduction of simultaneous tables (from a maximum of 10 down to two) imposed by the network came as a surprise. Microgaming says all operators were notified on May 4 that “the number of simultaneous tables a single player may play on an operator may be temporarily reduced for the betterment of the network ecology.” Microgaming says 5050 Poker was specifically notified “in mid May” that this edict would be “put into effect in June.” Two other operators besides 5050Poker were also subject to this reduction. 5050Poker announced its intention to establish a balance sheet for liquidation purposes late last month, although the recent statement by the parent company’s board suggested players could expect to see no more than 15% of their balances.