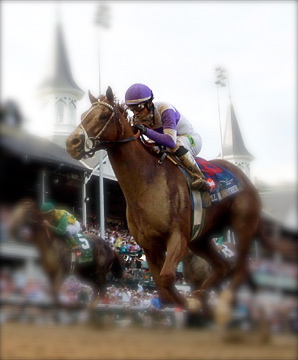 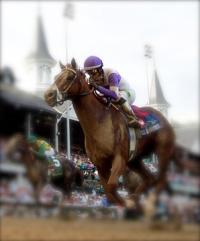 Just like that, our hopes of seeing the first Triple Crown winner in the last 34 years is over.

Belmont Stakes favorite and Triple Crown hopeful I’ll Have Another has officially withdrawn from this weekend’s race after suffering a swollen left-front tendon. The disappointment of not seeing the chestnut colt’s bid for history cast a gloomy cloud over what could have been a potential history-making race at the Belmont.

Trainer Doug O’Neill and owner Paul Reddam consulted with a doctor who determined that I’ll Have Another was showing signs of tendinitis in his left-front leg, an injury that the doctor indicated would take up to three to six months to heal.

With the threat of injury to the colt, the pair decided to withdraw from the race, ending I’ll Have Another’s bid to become only the 12th horse to win the Triple Crown and the first since Affirmed won it in 1978.

The horse was listed as a 4/5 favorite to win the Belmont, but now that he won’t be part of the field, Vegas oddsmakers are left scrambling to see who takes the mantle as the horse-to-beat in a race that has completely turned upside its head.

No odds have been released as of yet and it appears that we’re going to have to wait a little while before the numbers come out. Assuming that oddsmakers stick to the original lines, the early choice to be the favorite will be either Dullahan or Union Rags, who received 5/1 and 6/1 odds, respectively.

Needless to say, this is the kind of news that really puts a dampen on your day. It’s not as if it’s like any other race because a Triple Crown title was at stake for a horse whose main rival, Bodemeister, isn’t even scheduled to race.

But now that I’ll Have Another is out of the running, all the hype and anticipation surrounding the Belmont Stakes went away with him.