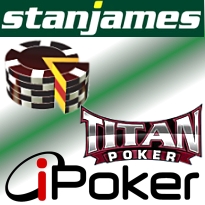 Fresh off its deal to transfer the bulk of its land-based casino holdings to Rank Group, Gala Coral’s online poker operation Gala Poker (aka Coral Poker) is making the switch from the ever-shrinking Ongame Network to Playtech’s iPoker network. The two companies aren’t strangers, in that Gala’s Italian-facing Eurobet.it site resides on the iPoker network in ‘the boot.’

Another iPoker resident, Titan Poker, announced last week that it would stop accepting new deposits from Spanish players ahead of that country’s market liberalization (scheduled to take place on June 1). A company rep has since told Poker Affiliate Solutions (PAS) that the decision was a forerunner to the company’s intention to seek an online gaming license from Spanish regulators. Titan also addressed its recent decision to shed its two-man poker pro roster via a note on its homepage, which stated Titan was “pursuing a new branding strategy which moves away from focusing on a pro team and emphasizes our appeal to mainstream and recreational poker players.”

Recreational players appear to be the last thing on the minds of the braintrust at the Cake Poker Network. PAS reported that Cake would increase its rakeback rate from 33% to 36% effective June 1. The rise will apply to all Cake players, new or old. The rate change is presumably the “exciting announcement” Cake promised when Lock Poker revealed it was acquiring “selected assets” of Cake with the intention of rebranding it as Revolution Gaming.

Now that PokerStars’ Zoom Poker has officially removed its beta training wheels, StanJames is the latest company to announce a Rush Poker clone. Blaze Poker doesn’t appear to offer any revolutionary improvements to the fast-paced cash game concept pioneered by Full Tilt Poker in 2010, other than to remove one more synonym for ‘quick’ from the trademark thesaurus. In related news, Betsafe has become the latest outfit to sign up for Relax Gaming’s Fast Poker product. A tweet sent out by Relax on Tuesday suggested Fast Poker had added a Heads Up option to its high speed offering, but PokerFuse claims the feature (which actually would be something new in this field) isn’t actually available yet. You know, a common piece of advice doctors offer premature ejaculators is to try to Relax.