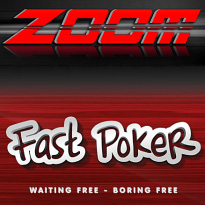 PokerStars’ ‘fast-moving ring game product’ Zoom Poker graduated from its public beta freeplay to public beta microstakes play on Friday. Even with stakes initially limited to 1¢/2¢ NLHE and PLO, all 1,500 eligible spots in the player pool were soon swimming with looky-loos eager to kick the tires of the closest thing to Full Tilt Poker’s revolutionary Rush Poker since FTP fell off the cliff post-Black Friday. (In response to a question on poker forum 2+2 as to how Zoom was different from Rush, one wag noted: “Zoom exists.”) By Saturday, the launch had gone sufficiently glitch-free that Stars felt confident enough to begin inching up both the stakes and the size of the player pool. Assuming no major hiccups arise, Stars is promising “more limits, more tables and more rooms” in the weeks to come.

But Stars aren’t the only poker outfit looking to capitalize on Rush’s absence. Alderney-licensed Relax Gaming has announced something called Fast Poker, which is expected to make its debut on iGame, Betsson, Unibet and a few other sites over the next few weeks. Unibet’s Daniel Eskola called Fast Poker “a major, exciting development” and Relax CEO Peter Österäker was sure more operators would be signing on to the Relax Fast Poker Network in due course because “Fast Poker has the potential to make poker really hot again.”

Considering Rush Poker used to claim it had a ‘patent pending,’ could the overworked attorneys at Groupe Bernard Tapie have a new project to tackle if/when they finally finish working out that deal to acquire FTP’s assets? Or will the facts on the ground have changed just enough in Rush’s extended absence to make such an argument (if it was ever valid) moot? Just for fun, we checked with a lawyer, who referred us to the precedent established a few millennia back in the case of Snooze v. Lose.