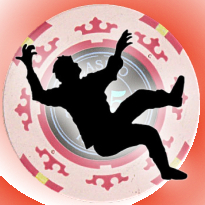 If the anemic revenue figures released Wednesday by Atlantic City’s newest casino Revel weren’t sufficient evidence that it alone couldn’t be AC’s saving grace, Thursday brought news that AC’s overall casino biz experienced a 10% revenue drop in April. The city’s 12 casino operations brought in a meager $260.6m for the month, with Revel’s $13.4m tally good enough for eighth place. Only two casinos posted revenue gains for the month: the Tropicana was up 39% to $26.7m after nearly tripling its table game winnings, while the Golden Nugget’s $11m total was up a much more modest 1%. The Borgata continues to top its competitors, with April’s $49.6m figure off only 0.3% from 2011. The month’s biggest loser was the Atlantic Club, which slumped 41% to $8.3m. Overall slots revenue was off 9.2% to $189.5m and table games take was down 12.1% to $71.1m.

Atlantic City’s three-and-half-year gaming revenue decline is all the more worrisome because visitor arrivals were up sharply in April. The Convention & Visitors Authority said air passenger arrivals rose 8% and overnight bus passengers rose 24.4%. Whatever these people are coming for, it ain’t gambling. For further evidence, the Press of Atlantic City recently revealed that the state Division of Gaming Enforcement’s casino blacklist is banning more homeless people and prostitutes – so-called “defiant trespassers” – than it is card cheats. Did someone relocate the Statue of Liberty to the Jersey shore? “Give me your tired, your poor, your huddled masses yearning to breathe recycled casino air…”

Nevada appears to have caught AC’s virus. Figures released by the Nevada Gaming Control Board (GCB) showed the state’s casino gaming revenue declined 10.8% in March to $854.5m. That’s the biggest monthly plunge since April 2009, the height of the global financial meltdown. Things were even worse on the Las Vegas Strip, where gaming revenues fell 14.9% to $449m. Downtown Vegas was off 11.6% to $43m. The unpredictability of Asian whales’ baccarat play is once again getting the blame/credit for upsetting Nevada’s apple cart, as the game’s hold percentage fell to 8% (12.6% being ‘normal’). GCB analyst Michael Lawton told the Las Vegas Sun the figure represented “a bump in the road.”

Strip casinos reported down numbers across almost all channels. Baccarat led the pack with a 51.4% decline in winnings. Results were only slightly better at roulette (-23.1%), blackjack (-22.5%), craps (-8.6%) and slots (-6.1%). On a positive note, March Madness pushed sports betting up 39.8%. The Las Vegas Convention and Visitors Authority said visitor arrivals rose 3.7% to 3.5m, while room occupancy rates rose slightly to 88.3%.