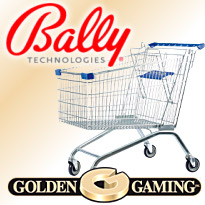 Nevada-headquartered gaming device maker Bally Technologies posted a 19.7% revenue gain in its fiscal Q3. For the three months ending March 31, Bally’s $228.6m revenues (a Q3 record) were the result of the company firing on all cylinders: gaming equipment sales rose from $63.7m to $79.3m; operations increased from $80m to $92.5m while systems revenue went from $47.3m to $56.8m. All that upward movement produced a net income of $29.9m, up from $23.8m in the same quarter the previous year. For the nine months of Bally’s current fiscal year, revenue is up 16% to $634m. Bally CEO Richard Haddrill called the company’s recent progress “momentous.”

Focus groups revealed grocery slots players had a different gaming mentality than Golden’s tavern slots players. (They’re far less likely to be wasted at three in the afternoon, for starters.) Supermarket players were also attracted by the ability to play slots in a smoke-free environment, and tended to live near the stores at which they played. Under the Rewards program, participating stores will award a certain number of grocery gift cards per month and players will also be eligible for cash, trips and other prizes. According to Arcana, “being rewarded for play with free groceries is a good incentive.”

Nevada gaming regulators have been busy rearranging their parking assignments. The Nevada Gaming Commission has reappointed Dr. Tony Alamo to a second four-year term on the five-member commission. Meanwhile, the Gaming Control Board has appointed replacements for three outgoing division chiefs. Jim Barbee, who formerly managed the Technology Division’s gaming laboratory, has been appointed head of the Technology Division. Barbee replaces Travis Foley, who resigned to take a position with one of Nevada’s private testing labs. Shirley Springer takes over the Audit Division from the retiring Linda Hartzell, while Brian Duffrin takes over as head of the Administration Division from Stacy Woodbury, who also retired.

Trip Advisor has put the Bellagio Fountains in Las Vegas on its “most talked about attractions” list. The list, which is compiled using the number of reviews each attraction receives via the travel website, selects only two destinations per major geographic region, for a total of 16 worldwide. North America’s other must-see attraction? New York’s Central Park. Sure, it’s attractive and all, but can Big Apple trees dance?