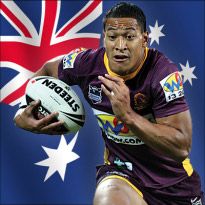 Always a progressive lot, Australian gambling critics have grown tired of aping their American counterparts by referring to this or that form of wagering as the “crack cocaine of gambling.” The Aussies – in particular, psychologist Dr. Sean Sullivan at the Compulsive Gambling Society – have gone all Breaking Bad on us by reclassifying pokies (video poker machines) as the methamphetamine of gambling. Welcome to the 21st century, sirs!

Concerns over the nation’s fondness for pokies have led Anglicare Tasmania CEO Chris Jones to call for laws that would force pokie players to stand while playing. The welfare agency head thinks an erect posture will prevent players from becoming “mesmerized” and “captivated” by Satan’s shiny playthings. The Mercury quoted Clubs Australia spokesman Jeremy Bath describing Jones’ plan as “bizarre” and “punitive.” Bath wondered what effect such an upright stipulation would have on the elderly, the disabled or the vertically challenged. What we want to know is, if they’re really on methamphetamine, how can they sit still long enough to play the pokies?

TABCORP AND TATTS NOT AMUSED BY VICTORIA
But has the pokie phenomenon peaked? Number crunchers at the Roy Morgan Gambling Monitor claim pokie spending has fallen significantly over the past year. In the 12 months to March 2012, Aussies spent $10.3b on video poker, compared to $12.3b in the 12 months to March 2011. Bad news for pokie operators, to be sure, but betting outfits Tabcorp and Tatts Group hope to offset this drop in pokie revenue by cashing in a $1.3b marker with the state of Victoria.

In 2008, Victoria surprised operators by announcing it would offer pokie entitlements to clubs and pubs rather than re-tender the existing licenses held by Tabcorp and Tatts. After picking their lower jaws up from the floor, the two companies pointed out that there were clauses in their existing agreements that called for the reimbursement of their original license fees if the government awarded the licenses to anybody else. In response, the Labor government of the day hired some lawyers to find a way to say “no, it doesn’t” and considered the matter closed.

But like the famous queen, neither Tabcorp nor Tatts was amused by Victoria’s magic eraser tactic. The existing licenses expire August 16, and both companies insist they’ll be taking the matter to court shortly thereafter. Tabcorp figures its owed $686m, while Tatts claims a mere $598m. The current governing Liberal/National coalition was not in power when the licensing decision was made, but after 18 months in office, it has yet to formally state its own opinion on whether or not compensation is due.

BOOKIES WARN RUGBY LEAGUE ON BETTING RIGHTS FEE
Sportingbet is warning the Australian Rugby League Commission (ARLC) to back off its plans to impose a betting rights model based on turnover rather than gross profit. The ARLC is proposing a shift from a pure 5% gross profit model to a hybrid model that would incorporate a percentage of bookies’ turnover. The move follows the High Court ruling in March that upheld New South Wales racing bodies’ right to charge betting outfits Betfair and Sportsbet a 1.5% turnover levy for race field data. When that verdict came down, Racing NSW CEO Peter V’landys predicted it would have “ramifications for other sporting bodies.” Now the ARLC wants its pound of bookmakers’ flesh.

Sportingbet CEO Michael Sullivan told the Sydney Morning Herald that a turnover model was “not a viable proposition for us.” If the ARLC went ahead, the betting company would rethink its sponsorship of the Brisbane Broncos and Sportingbet subsidiary Centrebet would rethink its sponsorship of Manly and the Penrith home stadium naming rights. Sullivan said Australian rugby had no better friend than Sportingbet, “but if there is going to be a tax imposed that is going to be overbearing to our business then we’ve got to review [sponsorships].” (Classic divide and conquer strategy: make individual clubs sufficiently concerned over the possible loss of sponsorship cheddar that they’ll lobby their own governing body to back off.)

Still smarting from its High Court loss, Betfair is predicting further anarchy if the ARLC piles on. Head of legal and corporate affairs Josh Blanksby suggested betting exchanges would be hit particularly hard by a tighter squeeze on the already much smaller margins of rugby league betting compared to horse racing. “What a 1.5% turnover fee equates to for the majority of bookmakers is about 30% of revenue.” Like Sullivan, Blanksby warned that companies would “redirect advertising and sponsorship money to other sports.” At least, until those sports’ governing bodies decide to put the arm on bookmakers.