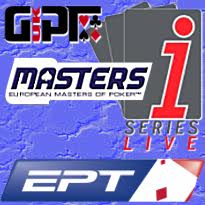 UK poker pro James Dempsey has won the inaugural installment of the iSeriesLIVE, the novel event in Dublin streamed live over the internet and on which viewers could wager on various props at Paddy Power. The 10-player $10k Sit N’ Go attracted some major poker names, including the two betting favorites Daniel Negreanu and Phil Hellmuth. Despite their favorable odds, Hellmuth was the first eliminated and Negreanu was sent packing in eighth place. Maria Ho started out as the player with the worst odds, yet ended up finishing third. Fellow Brit David ‘Devilfish’ Ulliott was the last player standing between Dempsey and glory, plus (oh, yeah) the $100k prize.

PaddyPowerPoker.com’s €3,200 buy-in Irish Open kicked off in Dublin on Friday and early indications are that around 500 players showed up on Day 1. Sadly, the Dublin stop on the Grosvenor UK Poker Tour, originally scheduled to get underway May 6, has been cancelled due to “unforeseen circumstances.” The GUKPT’s Russell Tamplin said the company was “very disappointed” that it couldn’t work out the kinks in time.

The European Poker Tour’s eighth season will come to a close in Monte Carlo on May 1. The Grand Final will feature a €100k Super High-Roller, the continent’s first six-figure buy-in event. Some 20 players have already signed on for the event, including Negreanu, Patrik Antonius, Bertrand ‘Elky’ Grospellier and online crusher Viktor ‘Isildur1’ Blom. There will also be a Champion of Champions €100k freeroll that will welcome all former EPT title holders. The top-six players will earn big bucks (euros, actually) toward future EPT buy-ins. Last year’s Champions event was won by Jason Mercier.