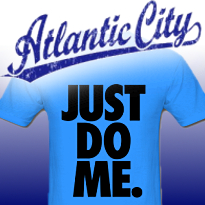 There’s only been a single month in nearly the past four years in which Atlantic City casinos have produced gaming revenues that were better than the year before, so clearly there’s only one solution: change the city’s marketing slogan. Yep, apparently “Always Turned On” was no longer capable of turning on potential gamblers, so the brain trust that is The Atlantic City Alliance hired the best wordsmiths the gambling resort’s dwindling accounts could afford. The result: “Do AC!” (Because “Do Nothing!” was taken?) We especially like the exclamation point, because otherwise, that slogan just sort of lies there like a Boardwalk hooker’s used condom that washed up on the Jersey shore. But with the exclamation point… Well, let’s just say, look out, Macau. Sorry, we mean… Look out, Macau!

The slogan change is part of AC’s bid to let a younger clientele know that it’s “not your father’s or grandfather’s resort,” even if, for the moment, it clearly is. The recent survey by the Lloyd D. Levenson Institute of Gaming Hospitality and Tourism determined that nearly half of the AC casinos’ current clientele is 55 or older, and 20% more are between 35 and 55, meaning roughly two-thirds are over 35. Worse, of the Northeast US residents surveyed who’d visited a casino in the past year, less than half had visited an AC casino, and less than a third (29%) of those surveyed had been to AC since 2003. Pennsylvania’s new casinos topped the survey’s choice of most popular casino destination.

Of those still gambling in AC, 51% made only one trip to the casinos in the past year, with just 3% visiting more than 10 times during that same span. Time-wise, 43% spend three hours or less per visit at the slots or tables, while 40% spend between three and six hours. Budget-wise, 28% spent between $250-$500, while 24% spent less than $100. As for what forms of gambling best tempt visitors to play, more than half play slots most often, with blackjack and video poker the next favorite forms of gambling. Roulette, craps and poker each scored in the low single digits.

In a bid to boost roulette’s sagging popularity (and perhaps attract the desired tech-savvy younger demographic, AC’s Tropicana has become the first casino in the tri-state area to introduce I-Table roulette. The table still features a dealer and a physical wheel, but the chips are entirely digital, and gamblers use touch screens embedded in the table to place their wagers. The lack of physical chip movement reportedly speeds up game play for the ADD generation. Better still, it helps keep tech-phobic fogies away.