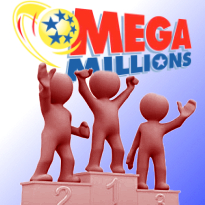 Three winning tickets have been identified in Friday’s record $640m Mega Millions jackpot draw. The winners were sold in Illinois, Kansas and Maryland. (Sadly, the Illinois ticket was not sold online.) Each winner will be worth about $213m before taxes. Had no one matched the winning numbers on Friday, the jackpot would have rolled over to an astonishing $975m, but with an estimated $1.5b worth of tickets sold, you figured somebody had to win the damn thing.

The size of the prize made this drawing something of a national talking point in the United States. Even Republican presidential candidate Mitt Romney saw fit to comment on the hoopla. Asked by a voter at a campaign stop whether he’d bought a ticket, the already fabulously wealthy Romney indicated he hadn’t, but joked that he understood Las Vegas Sands chairman Sheldon Adelson “has bought some tickets” – an offhand reference to the Adelson family’s $16m donations toward the presidential aspirations of longshot candidate Newt Gingrich (possibly the only longer shot than winning the Mega Millions).

Perhaps the weirdest scene leading up to Friday’s draw was in Nevada, one of eight states that don’t participate in the Mega Millions lottery. (Despite being lousy with casinos and sportsbooks, Nevada has no lottery.) That left Nevada residents who wished to play the lottery shit outta luck, unless they were willing to travel. By noon Thursday, the Associated Press reported the line to access lottery terminals in the Primm Valley Resorts shop just across the border in California was 1,000 people deep. The wait to get inside the shops was reportedly four or five hours.

Sam Roark, Primm’s director of operations, said the shop sold 184k tickets on Thursday and expected to sell 200k more on Friday. Intriguingly, Roark claims the store sold $20k worth of tickets to a single person, who Roark described only as a “Las Vegas boxer.” Did Floyd Mayweather Jr. reach into his magic backpack – the one he keeps stuffed with $10k stacks of Benjamins – for a betting option he couldn’t get at the M Resorts sportsbook?

The oddest thing is that, lack of lotteries aside, Nevada has more betting options than anywhere else in America – all of which offer better odds than a lottery ticket. If those thousands of people lined up for hours on a workday afternoon ditched work to scratch their lottery itch, few (if any) of them likely won minor prizes equal to the day’s lost wages. Worse, given that Nevada has the highest unemployment figure in the nation, and the fact that lotteries (unlike online gambling) are the preferred gambling choice of those on the lower socio-economic scale, it’s possible that many of those standing in line had no work to ditch, meaning they went further into the red to buy their magic beans from state lotteries. To borrow a line from the most recent Mad Men episode: “And they call us savages…”