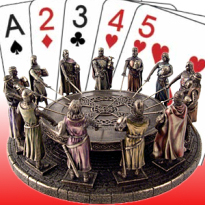 Online poker was front and center on Wednesday at the first meeting of Nevada’s reconstituted Gaming Policy Committee. Gov. Brian Sandoval resurrected the dormant body specifically to deal with Nevada’s moves toward instituting an intrastate online poker system, for which the state has already received two-dozen or so license applications. Gaming Control Board chairman Mark Lipparelli, who sits on the 11-member Committee, says the state may start considering the applications in May or June, although he’s not putting any timeline on when the first online poker hand will be dealt. Once licenses are issued, the lucky companies will then have to prove their technology is up to the task of keeping the games honest and restricting access to eligible adults.

That last point is an issue on which Las Vegas Sands’ chairman Sheldon Adelson has expressed grave doubts. In a bid to demonstrate the online poker issue isn’t being rammed through with nary a contrary word, Sandoval said he intends to solicit Adelson’s viewpoint at future meetings. Sandoval says the Committee will meet about every four to six weeks between now and August, with the goal of issuing a report and suggesting bill drafts ahead of Nevada’s 2013 legislative session.

While the Committee members seem unanimous in their wish for Congress to federally regulate online poker so that Nevada can serve as the “gold standard” for US online poker regulation and policy, they’re also pragmatists. Vegas Inc reported that MGM Resorts CEO Jim Murren, another Committee member, wryly observed that the federal government “doesn’t seem to get a lot done.” As such, Sandoval wants the state prepared to go it alone on the intrastate model if necessary.

According to timely tweets from @howardstutz, one of the few public commenters at Wednesday’s 90-minute meeting was Derek Webb, pro poker player and developer of 3 Card Poker. Webb stated that any online gambling firm that took bets from Americans should never be considered for a Nevada license. In Webb’s view, authorizing such “internet criminals” would tarnish the whole licensing process. Dunno where that leaves Murren’s joint venture partner Bwin.party, which in its previous un-merged incarnation definitely took wagers from Americans, although the PartyGaming half of the company did make amends via a $105m settlement with the US Department of Justice. Regardless, while the Committee intends to proceed with all due haste, Murren spoke for all present when he noted; “If anything goes wrong on this, we know we will be punished for it.”