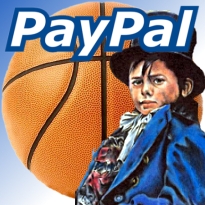 March Madness is only one day old and the upsets have only begun upsetting the hopes, dreams and hoop dreams of bracket-bearing b-ball bettors (boo-yaa!). First, it was the VCU Rams knocking off Wichita State 62-59. And for the first time since 1996, the defending champion has bowed out on day one, as the University of Connecticut fell 77-64 at the hands of Iowa State. Too bad Iowa’s reward is a ticket to face No. 1 seed Kentucky.

An unknown number of March Madness fans received some bad news even before the games got underway. Online payment service PayPal has reportedly clamped down on account holders it suspected of using PayPal to facilitate wagering on the annual NCAA spring hoopla. Bloomberg reported some users received emails from PayPal’s brand risk management department saying that their accounts had been “limited” after “it was determined that you are in violation of PayPal’s Acceptable Use Policy regarding your sales/offers of March Madness sports pool.” In order to have their accounts reinstated, the users are required to sign an “Acceptable Use Policy affidavit.” A PayPal spokesperson declined to specify just how PayPal had made the determination that these users were using their accounts for wagering activity.

Of course, users who sign the affidavits will be no closer to funding their March Madness exploits. So what’s a baller to do? If you’re eleven-year-old Max Kohil, you ask Mom for some seed money. The Omaha World Herald reports that Max is a budding entrepreneur who loves math and basketball, so he got the idea to start his own March Madness pool with his fifth-grade classmates. Entries cost $5, with the winner getting half the pot, and the rest split between the second and third place finishers. But Max didn’t have $5 himself, so he asked mom. She asked him what it was for. He told her the truth. She gave him the money. (Quick reminder: Mother’s Day is this Sunday in the UK and May 13 in the US.)

All was going swimmingly until Principal Kathy Nelson discovered Max’s escapades, which prompted a summons to her office and a stern talking-to. Max was forced to dissolve his pool and refund the money he’d collected. Max says he learned a valuable lesson. “It’s not okay to gamble. It’s like, illegal, sort of.” Sort of like how online gambling is still illegal in the US, unless it’s being run from a state which contains a lot of racehorses. With his keen grasp of the intricacies of US gambling laws, we predict Max has a budding future in Washington. Doubt us? Max’s own bracket had the North Carolina Tar Heels winning it all. Same as President Obama.