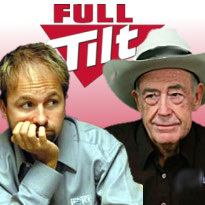 The Montreal Open, a charity poker tournament in Quebec that raised money for children with learning disabilities between 2005 and 2011, is feeling a little less open following news that its 2011 winners have yet to receive their winnings. The tournament was sponsored by Full Tilt Poker (FTP), which was responsible for paying the winners, but FTP haven’t paid anything to anyone since Black Friday. For the record, FTP told the tourney organizers that it did pay the winners by crediting their FTP accounts, which is sort of like saying they now have even more nothing. Um… huzzah?

Some of the disgruntled Open winners are now suggesting that since the Miriam Foundation charity was the recipient of their buy-ins and re-ups, it should also be on the hook for FTP’s failure to pay. This argument was backed by former Montreal Open co-organizer, lawyer Morden C. “Cookie” Lazarus, who suggested Miriam “had a moral if not legal obligation to pay” the winners.

Cookie, if you weren’t aware, is (a) rumored to be part of a group trying to relaunch Absolute Poker outside the US, and (b) godfather to Mitch Garber, head of Caesars Interactive, the fledgling online poker business that is somehow expected to generate enough rake from a regulated US market to erase Caesars Entertainment’s $22b (and growing) debt. If encouraging such fantasies is all Caesars Interactive is required to do, then it’s a good thing the company is run by Garber, who for years engaged in the fantasy that he was running PartyGaming, when everyone else knew it was Ruth Parasol, Anurag Dikshit and others who really called the shots. But we digress…

Meanwhile, things are getting uglier between Cookie and Miriam. According to PokerNews, the two parties are waging a legal tussle over the rights to the Montreal Open name. Cookie’s also teamed up with a new sponsor (PartyPoker) on a new charity tournament with a different beneficiary (the Jodi Lazarus Fund for Hereditary Breast Cancer). As a good-will gesture (and a slick PR move), Cookie’s invited the unpaid Montreal Open winners to his new event as VIP guests.

DANNY GOES BATTY, DOYLE GOES SOFT
Last week, Daniel Negreanu posted a video blog in which he doubled down on previously expressed sentiments regarding FTP board members Ray Bitar, Chris Ferguson and Howard Lederer. Specifically, Negreanu said he wouldn’t bat an eyelash if players with thousands of dollars in limbo since FTP’s demise happened to spot the FTP “scumbags” on the street and subsequently decided to “bash [them] in the nuts with a baseball bat.” Kid Poker took pains to stress that he wasn’t personally planning on laying some Cooperstown smack on anyone’s grapes, and insisted that he’s “not Charles Manson” instructing others to act thusly, just that he understands the impulse to do so.

Now Doyle Brunson has metaphorically saddled up and ridden to Ferguson’s and Lederer’s rescue. On Monday, Brunson issued his own lengthy blog post on the subject of FTP malfeasance, in which he tried to ease the nooses off the necks off Ferguson and Lederer while tightening the ones around Bitar, FTP’s chief financial officer, the Alderney Gambling Control Commission and Phil Ivey (via an oblique reference to an FTP-sale-killing lawsuit filed by a “major stockholder”). Doyle’s reasoning? “I’ve been in contact with Lederer the last few months. When someone I’ve known for years, trusted and respected looks me dead in the eye and says he didn’t know about the financial problems, call me a big old Texas sucker because I will believe them.”

Doyle admits he’s no lawyer, but believes that “intent” is “a very important word.” Doyle’s opinion is that “there was no intent of wrong doing [at FTP] for years.” The curious qualifier of “for years” doesn’t really bolster Doyle’s argument. With all due respect to Texas Dolly, his blog tries to defend the indefensible by rationalizing that Ferguson and Lederer were poker players first and businessmen second. So, which of these two hats were they wearing when they were cashing all those monthly six-figure dividend checks? Ignorance is no excuse, and claiming that you didn’t know when you had a fiduciary duty to know just won’t cut it in this day and age.

Brunson ended his blog with a plea for tolerance via Christ’s instruction to “let he who is without sin cast the first stone.” Then again, right before Samson pushed over the stone columns that brought the roof down on the Philistines who’d blinded him, he said (hopefully with a thick Schwarzenegger accent): “Though ye have done this, yet will I be avenged of you, and after that I will cease.” Personally, we’re going with the Old Testament on this one…