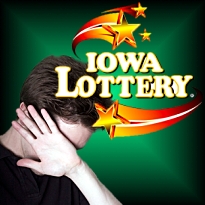 Lotteries may be the most popular form of gambling, but Global Betting and Gaming Consultants (GBGC) have tipped 2012 as the year that commercial casinos overtake lotteries as the #1 generator of gambling revenues. For 2011, GBGC had lotteries claiming 28.4% of overall gambling revenues, with casinos not far off the pace at 27.7%. Assuming China’s economy doesn’t hit the (great) wall and take the rest of the world down with it, GBGC figures continued growth in Macau, Singapore (where the integrated resorts are only in their second full year of operations) and other Asian jurisdictions will make 2012 the year the casinos take point.

How would such predictions fare if lotteries weren’t required to pay their winners? Prepare yourself for an early candidate for WTF gambling story of the year. Last month, we told you about the two local lawyers who walked into the Iowa Lottery office on Dec. 29, two hours before a one-year deadline was set to expire on an unclaimed $14.3m winning Hot Lotto ticket. These lawyers presented the winning ticket to lottery officials on behalf of Crawford Shaw, a New York lawyer claiming to represent something called Hexham Investment Trust, whose membership Shaw was keen to keep secret.

Shaw claimed to have been contacted 10 days before the deadline by another lawyer representing the ticket’s owner. The identity of this lawyer was, according to Shaw, protected by attorney-client privilege. Pressed for more detail by dubious Lottery officials, Shaw claimed Hexham had “one trustee and there’s one beneficiary, and the beneficiary is a corporation in Belize.” Lottery spokeswoman Mary Neubauer summed things up for the Omaha World-Herald: “Just when it seemed like the story couldn’t get weirder, it got weirder.”

Lottery officials insisted they needed more info to allow them to release the funds to Shaw/Hexham, so Shaw changed tack, offering to donate the whole jackpot to charity. Presumably after a long pause, lottery officials stated they’d still need to know the ticket owner’s identity. Hearing this, Shaw abruptly withdrew all claim to the ticket “to avoid further controversy.” The millions will be returned to the Lottery prize pool, and the Iowa Attorney General and Department of Criminal Investigation have launched investigations, mainly because they’d never seen this particular Twilight Zone episode, and they really wanted to know how it ended.

THE MANY-LAYERED MR. SHAW
Shaw has what they call a colorful history, dating from his mid-90s theft-by-check charges to his role as CEO of automotive fluids company Industrial Enterprises of America (IEAM). James Margulies, CEO after Shaw left IEAM in 2005, was convicted last year of (among other things) larceny for his role in a $110m securities fraud at the company. Shaw was not charged in the debacle, but IEMA wants Shaw to return a few millions he received for consulting work that New York lawyer Tom Curran charges never got done. Curran told the Associated Press that Iowa officials will likely encounter “some of the same difficulties we’ve had in terms of Mr. Shaw being a many-layered person.” Shaw denied any wrongdoing at IEAM on his watch, telling Reuters that the money he received from the company had been approved by the court.

The Iowa Lottery has videotape of the ticket being purchased at a gas station in Des Moines on Dec. 23, 2010, but all they’ve determined is that the buyer appears to be of legal age. A few Iowans have tried to claim the ticket was originally theirs, but the lottery says none of these claims are legit. The lottery doesn’t believe the ticket was stolen, so speculation abounds. Was the ticket purchaser a Lottery employee and thus ineligible to play? Was it a vengeful spouse mid-divorce looking to keep that greedy bitch/bastard from sharing in the bounty? We’ll give the last word to Curran. “If they have a legitimate entitlement to lottery winnings, who sits there and says, in response to that very rational request to give information, ‘Nevermind, keep the money.’ Who does that? Who does that? No one.”