Home / Casino / Half of Illinois voters in favour of gambling expansion 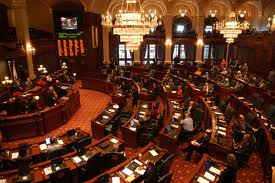 A poll which asked Illinois voters if they support the development of casinos has revealed that half are in favour of the expansion of gambling in the state.

While political brokers work to strike a gambling deal, the poll by Tribune/WGN-TV demonstrates how attitudes towards gambling in Illinois have changed, and for the better. The results show how the 50% that now support the idea of more casinos is twice the results of a similar poll back in 2004.

Here’s a breaking down the poll results:

A report by the Chicago Tribune says that the poll is a reflection of a new level of support for gambling in the state, which is consistent among Cook County and downstate voters. However, making headway on gambling expansion issues could prove difficult in an election year when all 177 House and Senate seats are on the ballot and 42% of the polled state voters show opposition to the idea of more casinos.

After what happened last year, too, nothing is certain. Gambling expansion backers got the closest they’ve been in 20 years when lawmakers approved five new casinos, including one in Chicago, but Democratic Gov. Pat Quinn soon blocked the deal due to concerns over slot machines at racetracks.

Nevertheless, since then, Quinn has named a former lawmaker to lead negotiations with gambling interests due to ongoing pressure from Mayor Rahm Emanuel – who wants a city casino to raise money for infrastructure projects – so it looks like the state may have more chance to see the approval of casinos. Which way do you think the vote will swing?