Home / Poker / Five on Friday: Light at the End of the Tunnel 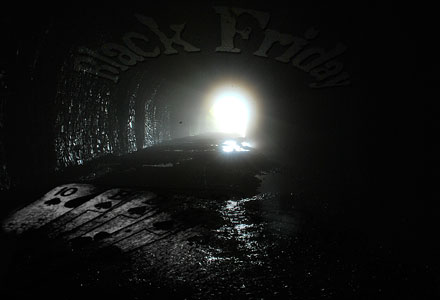 When you’ve been stuck in a dark tunnel for a long time, seeing a light suddenly appear at the end is a tricky thing. On the one hand, it’s a light! That alone is reason enough to get excited. On the other hand, it’s just a light and you’re still in a tunnel. You don’t know the light’s source – it could be an exit, sure, but it could also be something not nearly as beneficial to you. And then there’s the fact that you don’t know how far away the light actually is. You could keep crawling for years and never reach that light.

Now that February is here, we’re beginning to close in on the one-year anniversary of Black Friday. The political landscape in the United States with regard to online poker has changed a lot since then, going from “aligned against all things poker” to “hey, we can make a lot of money off of this” in the span of just a few short months.

Nowhere has this political shift been more pronounced than in the state of Nevada, where the biggest gaming companies in the world are headquartered. The American Gaming Association, which represents most of those companies, has historically been opposed to the expansion of gambling into cyberspace. But few states have been hit as hard by the American financial collapse as Nevada, so the opportunity to seize a proven market led the AGA to change its stance. Then in late December of last year two things happened to tip the balance toward legal online poker. First, Nevada passed a law to allow online poker within its borders should the federal government decide to allow such a thing within the United States. Then, a few days later, the Department of Justice released an opinion that the Wire Act of 1961 – which it has historically relied on as a basis for its anti-online-gambling stance – only applied to sports-betting. Advantage: Vegas.

In the absence of any federal actual law prohibiting online poker, the DOJ’s opinion on the Wire Act was enough reason for talk to start up again in several other states about legalizing and taxing the shit out of online poker. Of course, it’s not as simple as just saying “it’s legal!” or Americans would already be back to playing online by the millions. The brick-and-mortar gaming industry is going to want to be protected against competition, a goal that will be accomplished through the regulatory process. Local, state and federal political entities of all sorts are going to want to get their due – for the state through those same regulatory processes, and for themselves individually through campaign contributions and other means. And then there’s the matter of sorting out the business of what to do with those who weren’t willing to wait for a government imprimatur to jump into the online gambling business.

In other words, it’s going to take some time before Americans are playing online poker on AGA members’ servers. There are still miles of road to be traveled, and a lot can happen between here and there. The past two weeks saw five stories emerge that gave us a slightly better, though not crystal clear, idea of how far away the light at the end of this particular tunnel really is.

The number of corporate entities that have requested permission to play ball went up by two late this week when MGM and Boyd Gaming filed their applications with the state to become fully licensed operators in the coming Nevada online poker market. Both companies applied as Operators, one of the four categories eligible for a license. (The other three are Distributors, Manufacturers and Service Providers.) On the heels of their October online poker deal with Pwin, this could very well signal confidence from MGM and Boyd that Pwin is going to win approval from Nevada when it eventually applies for a license. Then again, they might be preparing to do business with another Service Provider altogether. For now, 12 companies – including Nevada’s MGM, Boyd, Caesars, Monarch Casino, South Point Poker and Fertitta Interactive – have filed for consideration by the state, which still has not released a timeline for issuing of licenses.

Former WSOP Main Event winner Chris “Jesus” Ferguson was one of the central figures named in US Attorney Preet Bharara’s indictments against Full Tilt for defrauding poker players of $440 million. If Ferguson’s latest dealings are any indication, that kind of money helps you lawyer up pretty well. Ian Imrich, Ferguson’s attorney, told Card Player this week that his client expects to have his case settled early this year – not bad for one of the supposed masterminds of a “global Ponzi scheme.” Along the way, Imrich took exception with a Subject: Poker report last week that Ferguson was threatening the closure of the Groupe Bernard Tapie deal by seeking reimbursement for millions of dollars in Full Tilt’s post-Black Friday expenses. Instead, Imrich said that Ferguson was requesting an accounting of any money that CEO Ray Bitar may owe to Ferguson. “In short,” said Imrich, “Chris’ request has nothing to do with Tapie or the agreement reached with [Full Tilt] and DOJ, which my guy supports.”

So what is holding up the GBT-Full Tilt deal, then? Could it be the money owed to the site by some of its former sponsored pros? Card Player reported this week that a number of poker players, including Phil Ivey and Erick Lindgren, collectively owe $18 million to Full Tilt Poker. Ivey and Lindgren reportedly owe the site $4 million each. David Benyamine and Layne Flack both reportedly owe $2 million, while Barry Greenstein, Mike Matusow and others are said to owe smaller amounts. Greenstein quickly took to 2+2 to explain his debt, but no one else has stepped forward with any sort of explanation of their situation. An attorney for Groupe Bernard Tapie told PokerStrategy.com that if “the money doesn’t come in, it creates a serious obstacle to completion of the deal,” and that the players’ debts aren’t “the only issue with the takeover,” but that they are “substantial.” It’s unlikely the deal will be scuttled over an issue of this size – but GBT certainly seems to have a handle on using it as a bargaining chip.

One group with a serious stake in a future American online poker market is the numerous Native American tribes that operate casinos throughout the U.S. They get the least attention when people start talking about, but outside of the Las Vegas corporate interests they’re the ones who have had the most impact on Washington’s discussions of online poker. Both of the Congressional online poker hearings in 2011 were led by Rep. Mary Bono-Mack, whose district includes seven Indian casinos, and the National Indian Gaming Association’s Ernest Stephens was the first witness to testify before her committee. Now the senior legislative branch is also using the tribes’ lens to examine at the issue, in the form of a Feb. 9 hearing before Senate Committee on Indian Affairs. As Mr. Stephens made clear in his testimony last year, the tribes do not plan to roll over and give up their hard-won foothold in the casino business as it transitions to the internet – and that means the tribes will be a major force in the future of American online poker.

5. Jon Kyl getting his

Perhaps no figure still active in the U.S. government today has had as much influence on the current state of the American online poker market as the senior senator from Arizona. Kyl’s been an anti-gambling warrior for decades, and along with former Tennessee senator Bill Frist he was one of the major forces behind UIGEA. Since then he’s also been a stumbling block in the Senate, where the gaming industry’s best friend, Harry Reid, is in charge of setting the agenda. Now down to his last year in office, Kyl appears to be signaling his willingness to deal with Reid on allowing online poker legislation, telling the National Journal that “Quite possibly something will be done” with regards to online poker this year. This is Kyl’s last chance to wring some private benefits (such as a legacy that impacts the online gambling industry in America) out of changing his position, so it’s not terribly surprising for him to strategically shift. Whether or not that translates that into a win for Vegas concerns is another matter, but Kyl is getting his and bodes well for Reid, too.

So what’s the upshot of all these stories? On one hand, we’re still stuck in a tunnel. On the other hand, we’re closer to the exit than we were just a few weeks ago. Take all that for what it’s worth when you’re trying to figure out what to think about that light in front of us.