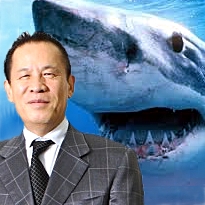 Whilst talking up his company’s profit margins to investors on Thursday, Wynn Resorts CEO Steve Wynn was asked about the company’s ongoing legal tussle with Kazuo Okada. Okada, chairman of Japanese gaming device maker Universal Entertainment and Wynn Resorts’ single largest shareholder ($380m worth), recently had the nerve to ask Steve if he might, you know, have a gander at Wynn’s books. In response, Wynn Resorts asked a Nevada court for permission to tell Okada to piss off.

On Thursday, Steve told investors that the company had a “sharp disagreement with our colleague with regard to the Philippines. And we have expressed our conviction that it was not an appropriate business opportunity for us for a couple of years now. For reasons that are best known to Mr. Okada he has not enjoyed that disagreement.” Steve went on to say that Wynn’s board had “a very strong opinion about not wanting to give the impression that Wynn Resorts was the developer of the land that [Okada has] acquired in the Philippines. … We are not going to go into business in the Philippines. Mr. Okada may choose to do so but he does so without the organizational support or financial support of the company.” That echoed comments Wynn made the day before, when he told the Las Vegas Review-Journal’s Howard Stutz that the legal dispute was because Okada “got himself into trouble” over his Philippines investment.

Steve isn’t the only one giving Okada grief over his $2b Manila Bay Resort (which recently broke ground as part of the Bagong Nayong Pilipino-Entertainment City Manila complex). All Voices reported that Okada was recently lambasted by Fernando Hicap, the national chair of Pamalakaya, a group of local fishermen who say the casino complex means “the death certificate to all fishing activities in Manila Bay … small fisherfolk … have no future under a Republic of Gamblers.” Hicap went on to say that President Aquino, state-owned gambling outfit Pagcor “and their Japanese client want to replace the fisherfolk of Manila Bay with slot machines. This is extremely immoral, anti-people and diabolical.” Pardon us, we don’t mean to sound insensitive to the plight of the fisherfolk, but we’re totally distracted by the concept of a Republic of Gamblers. Damn, would that be a cool country! Can you imagine the flag?

Last week, Philippine National Police Criminal Investigation and Detection Group (CIDG) director Samuel D. Pagdilao Jr. was lamenting the fact that the Court of Appeals had declared the country had no specific law banning online gambling. There still isn’t such a law, but online security moved a step closer to reality after the Senate passed Bill 2796, the Cybercrime Prevention Act of 2012, by a vote of 13-1. There’s nothing in the bill that criminalizes online gambling, but ‘cybersex’ would be punishable by one to six months in jail and fines of P200k to P1m (US $4,700 to $23,400) “depending on the damage caused.” You mean, like if you’re mid-wank and your laptop lid suddenly snaps shut on it like the jaws of a crocodile? And someone else would be liable for repairing your johnson? Cool …