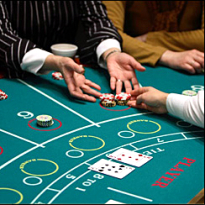 Las Vegas’ McCarran International Airport handled 41.5m passengers in 2011, according to figures released by airport administrators on Friday. That’s 1.7m more than the year before, but still down 6m from the pre-recession peak set in 2007. The 4.3% yearly increase in traffic was spurred by a 13.8% increase in international travelers, most of them from Latin America, Canada and the UK.

It will be interesting to see how Nevada’s January international arrival stats compare with December. Casinos in Las Vegas rolled out the (lucky) red carpet this month for Asian high rollers looking to celebrate the Lunar New Year by playing a few hands of nosebleed baccarat. Debra Nutton, senior VP of casino operations at the MGM Grand, told the Associated Press that her casino could double the number of baccarat tables on its floor during the Chinese New Year to accommodate demand.

Strip casinos are increasingly reliant on Asian whales and their fondness for baccarat, but the inherent volatility of the game means revenues are down sharply one month, only to rebound just as dramatically the next. Hold percentage figures from Nevada casinos between 2004-2010 show baccarat having the largest variance among casino games. Dave Schwartz at the University of Nevada, Las Vegas says the unpredictability unnerves “a lot of the more business-oriented folks” who might otherwise invest in casino stocks, but with baccarat now representing almost 60% of MGM’s overall table games revenue, Nutton says “for us to make money in gaming today without baccarat is almost impossible. We need the big whales to make money.”

As for why an Asian Moby Dick would bother flying all the way across the Pacific when he has numerous high-end gambling options closer to home, the answer may lie in the incentives Vegas casinos are willing to offer to tempt these whales. Casinos can afford to offer such incentives because the effective tax rate they pay on gaming revenues in Nevada is a fraction of what they’d pay in Singapore or Macau. So a company with operations in all three markets (like Las Vegas Sands) could see value in spending tens of thousands on private jets and comped penthouse suites to save hundreds of thousands in taxes on potential VIP baccarat revenues.

Mirroring Atlantic City’s larger problems, the baccarat phenomenon has yet to take off in the eastern seaboard’s gambling hub. Despite doing more every year to welcome Chinese New Year celebrants, New Jersey Casino Control Commission spokesman Daniel Heneghan admitted that AC’s casinos “have never attracted the kind of big players … that Las Vegas has.” In AC, blackjack is still king among table games, outstripping baccarat revenues by almost a 3:1 margin, although that might be because AC casinos have 588 blackjack tables, but just six tables offering baccarat and 128 more offering lower limit mini-baccarat. A case of demand limiting supply or vice versa?