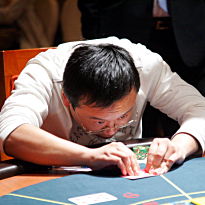 Stocks of casino companies with operations in Macau went on a little roller coaster ride over the past month, as fears over the financial stability of some Chinese banks washed up on Macau’s shores. Last week’s news that state-run Central Huijin Investment had begun buying shares in the country’s four biggest lenders — a move intended to inject some confidence into the market — only seemed to underscore how serious the situation had become.

The fear of some gaming stockholders is that, should the situation worsen, the flow of VIP high-rollers into Macau could dry up. Recent numbers issued by the Asian gambling enclave reveal just how dependent it is on those big spenders, and the one table game they overwhelmingly prefer. For Q3 2011, baccarat accounted for 91.7% of gross gaming revenue at Macau casinos. The VIP baccarat segment alone contributed 73.7% of GGR. The VIP segment rose from MOP 34b in 2010 to MOP 51.75b (US$6.46b) this year, an increase of 52%. Mass-market baccarat grew 42.5% to MOP 12.66b ($1.57b) over the same period.

Asked whether the rumblings in China’s financial system would negatively affect Macau, the CEO of major junket operator Asia Entertainment and Resources Ltd. doesn’t see it happening. Kenny Leong says that even if the overall financial picture worsens, the big junketeers deal mainly with clients who have pockets so deep, they can’t find bottom. Credit Suisse analyst Gabriel Chan told CNBC that, unlike 2008-09, when the worldwide market plummet did impact Macau’s performance, “casinos and junkets are cash-rich. They can still drive growth in the interim by pumping more working capital into the system.”

Galaxy Entertainment Group CFO Robert Drake predicts even greater things for Q4, spurred by boffo numbers during “Golden Week”, the national holiday that commenced Oct. 1. Speaking to Reuters, Drake said Golden Week “has again proven to be a huge boost to business. The growth of revenue in Macau – both VIP and mass market – has been strong and we have no signs of any recent slowdown.”

Wynn Resorts will reveal its Q3 earnings on Wednesday after the markets close. Analysts expect profits at Wynn’s Macau operations to once again be the company’s prime mover. JP Morgan’s Joseph Greff expects Wynn’s EBITDA to be up 48% over the same period last year. Simply put, in uncertain financial times, Macau appears to be a rock of stability.