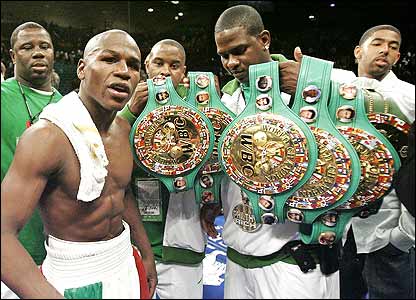 Floyd Mayweather has made the first move in the chess match to sort out the fight the whole world wants to see against Filipino national hero Manny Pacquiao. Anyone doubting whether Money is up for the fight will have been chowing down on humble pie after the sports betting fan tweeted: “Manny Pacquiao I’m calling you out let’s fight May 5th and give the world what they want to see.,” before adding: “My Jail Sentence was pushed back because the date was locked in. Step up Punk.”

Mayweather’s stint in jail might only be 87 days and you would have understood had he waited to obtain some dirty tricks whilst in the clink. He obviously believes he can take the Filipino boxer-turned-politician without the dirty tricks. Remember that PacMan didn’t look near top form in his last outing with Juan Manual Marquez and, upon seeing that, Mayweather looks to have been convinced that a fight ain’t such a bad idea. There’s always a chance Manny has duped Mayweather into a false sense of security. Even if that’s the case Mayweather won’t be phased and has the tools in his arsenal for a victory.

Pacquiao is yet to reply to the unbeaten boxer’s request for a fight and it could all be a fairy tale story that ends with Mayweather fighting a nobody and retiring to the pen. There’s still a very long way to go until Cinco de Mayo and a lot may change before then in this so perfect of soap operas.

Sports betting firms will be relieved that Money doesn’t have a chance to bet on himself in this fight as given the luck he’s had recently they’d be taken to the cleaners. The sports books around the world will instead be happy that these two finally looks ready to, in the words of Mills Lane, “get it on.”