Home / Business / On the DoJ, Poker Hysteria, and the Enduring Importance of the well-placed Comma “People can foresee the future only when it coincides with their own wishes, and the most grossly obvious facts can be ignored when they are unwelcome.” 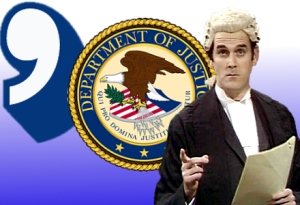 I remember well the sear of the strap across the knuckles of my scarlet hand in the headmaster’s office – a well-deserved correction, I readily admit, but one that I maintain to this day was administered with unseemly gusto. Some belligerence on my part to my English teacher impelled my long walk to the headmaster, in turn sparked by a disagreement over my copious use of multiple exclamation points in my writing, a practice I insisted was perfectly correct with all of the grace and tact of a cricket bat to the face.

And so I take punctuation rather seriously.

Over the holidays, the poker advocates, pundits, associations and online gaming lawyers have worked themselves into a froth. The cause? The US Department of Justice released an Opinion (dated September 20, 2011, but which became public in late December) regarding its interpretation of the scope of the Wire Act.

Upon its public release, the Opinion was promptly declared by online gaming observers and lawyers a “shocker”, “game-changing”, a “blockbuster”, “historic”. Stock prices of online gaming companies and suppliers twitched. The Poker Players Alliance ejaculated a press release within minutes. There was much gnashing of teeth and rending of garments.

And upon what did this Opinion ultimately turn?

THE OPINION – WHAT DOES IT ACTUALLY SAY
Let us first understand exactly what happened. It all started so simply. New York and Illinois have developed proposals to use the Internet to allow in-state adults to purchase lottery tickets online. A simple enough idea. However, they were concerned.

The actual Internet traffic was to route outside of their State lines and they also wanted to use transaction processors that weren’t necessarily in NY or IL. They were fearful that this interstate element would trigger the federal Wire Act, a piece of legislation implemented in 1961 during Robert Kennedy’s anti-Mob crusade. You see, though the language of the law seemed to limit it on its face to bets or wagers on “sporting events or contests” the DOJ had consistently taken the stance that the Wire Act applies to any inter-state transmission of bets or wagering (or information relating to bets or wagering). So, NY and IL were concerned that the out of state transmission of this information to the processors would run afoul of this federal law and they asked the DOJ to provide an Opinion before they would proceed.

The entire matter turns on a single section, which, for the sake of “clarity”, I’ll reproduce here:

Clearly, the drafter of this clause didn’t attend my English class, or, if he did, he must type with one hand today.

There are two principal sections here. I’ve inserted numbers and bolded text for clarity, but the clause breaks down thusly:

“Whoever being engaged in the business of betting or wagering knowingly uses a wire communication facility for:

on any sporting event or contest

(2) for the transmission of a wire communication which entitles the recipient to receive money or credit as a result of bets or wagers, or for information assisting in the placing of bets or wagers

shall be fined under this title or imprisoned not more than two years, or both.”

So, the Opinion the DOJ issued specifically addressed the following question: “Does the phrase ‘…on any sporting event or contest…’ modify the first half of part (1) and/or part (2)?”

MY KINGDOM FOR A COMMA
The actual case law on this question was always limited, but it was split. In Re Mastercard in 2002 (an internet casino-only case – i.e. no sportsbetting) the court (upheld on appeal) concluded that the Wire Act applied only to sports betting and contests. But, the district court in Lombardo (the “BetUS” case – obviously implicating sportsbetting) in Utah in 2007 reached the opposite conclusion; an instance of “hard cases make bad law” if ever there was one.

Even the Congressional Research Service (the body responsible for putting together legal analyses and summaries for Congress) acknowledged that the language permitted either interpretation in 2006.

I’ll cut to the proverbial chase, shall I?

The DOJ Opinion concluded that “both provisions are limited to bets or wagers on or wagering communications related to sporting events or contests.” Referring to legal “principles of construction” used to interpret statutes, the context and history of the passage of the law, and the fact that other laws were being passed contemporaneously that dealt explicitly with other forms of gambling, the DOJ publicly changed its stance on the breadth of the Act.

It should be noted that even the DOJ pined for punctuation:

As a result, the DOJ concluded that, since the lottery information passing beyond state borders was not in reference to bets or wagers relating to “sporting events or contests”, the Wire Act did not apply.

SO WHAT DOES IT MEAN?
It must first be said that this is an opinion of the DOJ, not a ruling or decree that is binding on a court. It lays out the DOJ’s policy stance and one could feel reasonably confident that it will reflect their decisions as to whether and when to bring charges under the Act going forward. That’s not to say charges would not necessarily be used as a lever in broader prosecutions, however. The Wire Act has been routinely cited historically in a grocery-list of allegedly implicated statutes whenever the prosecutors could shoehorn it into the indictment – see World Sports Exchange/Cohen (1998 – NY); Paradise Casino (2000 – Missouri); Worldwide Telesports (2005 – Washington, DC); BetOnSports (2006 – Missouri); Neteller (2007 – New York); ESI/Citadel (2007 – New York). This is simply kitchen-sink indictment drafting, and hardly surprising – it makes potential repercussions sound far scarier and (as it proven by history) substantially increases the likelihood of a settlement in advance of trial.

It is also noteworthy that such opinions can be revoked or changed by this or subsequent administrations, though that is admittedly quite unusual. Furthermore, it does not affect the ability of Congress to pass any law changing the landscape entirely, or indeed to amend the Wire Act itself.

The Poker Players Alliance promptly issued a press release entitled PPA Applauds DoJ Ruling: Online Poker Does Not Violate the Wire Act, which undoubtedly prompted the DoJ to scratch its collective head. Further complicating public perception, poker advocates have muddied the waters (one hopes inadvertently). For example, the executive director of the Poker Players Alliance John Pappas stated that the Opinion “…gives states the confidence to move forward with intrastate Internet poker.” Why is this statement “complicating”? Because the Wire Act never applied to intra-state anything. Indeed, the only reasons NY and IL required the opinion at all was because they wanted to be sure that the transmissions out of state would not run afoul of the Act.

I have been asked repeatedly these last weeks what, in my view, this all means. For those who are interested, these are my thoughts regarding the most common questions:

Does this mean that the Wire Act doesn’t apply to Online Poker?

What the opinion affirms is that the DOJ considers the Wire Act to apply to bets or wagers relating to “sporting events or contests” and that in-state lotteries do not qualify as either. Period. It does not opine as to online poker specifically and in my view it would be a profound error to overread the consequences of the Opinion, as there remains the very germane question of whether poker would satisfy this definitinon. It is worth noting that the DOJ expressly considered the question of whether the or not word “sporting” modified both the word “event” and the word “contest” (i.e. did the law apply to “sporting events” and “contests”, or to “sporting events” and “sporting contests”) and concluded that “sporting” modified both. The question of betting “on” versus participating “in” a sporting event or contest is not addressed by the opinion, so prudence dictates caution here.

What about inter-state poker?

There would be no obvious federal barrier to states adopting a model similar to that developing in Canada – states (like the Canadian Provinces) could choose to create regulatory regimes individually and then connect to other similarly-regulated States. Larger states with more significant internal liquidity may be less inclined to participate in a multi-state network, but market forces would quickly sort out the participants.

It is certainly not without its complications, but I can see a path forward.

What does this do to the likelihood of a Federal solution? What about the Barton proposal?

I’m going to commit the most egregious sin of an industry pundit – I’ll give a straight and unequivocal answer in writing.

The Barton bill is DOA, an irrelevancy, a distraction.

It’s going nowhere other than a slow death in committee.

In a Congress so fractured and paralyzed by ideological hardliners, and at this point in a Presidential election cycle and with both Houses of Congress up for grabs by either party, there’s no sane politician inside the Beltway that’s going to want to take on a potentially incendiary issue such as this in 2012, notwithstanding “bipartisan” support.

The well-proven and well-worn federal political “solution” to such trigger issues is to simply punt to the states and wash ones hands of the matter. If online gambling liberalization happens in the United States, it’s going to happen on a state-by-state basis.

What effect will this have for international operators of online casinos or poker rooms?

The effect is negligible.

Of course, nothing has changed for foreign sportsbook operators. Sportsbooks or operators that also operate a sportsbook as a channel should be as mindful of the Wire Act as ever, as it squarely applies.

Pure online casinos may have an argument now that the Wire Act does not apply to their operators, but there are plenty of other arrows (federal and state) in the prosecutors’ quivers.

It is NOT true that there is now no federal law available. I frankly cannot trace how this meme started, but it’s categorically false. The Illegal Gambling Business Act makes it a federal crime to conduct, finance, manage, etc. any gambling business that is in violation of State law. And, of course, the UIGEA is similarly triggered for relevant activities. Since virtually every State either criminalizes unlicensed gambling operators, or prohibits non-governmental operators outright, there are ample options available to prosecutors (see Black Friday, where they used the underlying NY statute – not a “predominantly chance” threshold, by the way – to underpin/trigger the UIGEA charge). Even for poker or casino operators, prosecutors simply need to choose a state of prosecution, gather evidence to trigger the local state provision, which then triggers both the UIGEA and the Illegal Gambling Business Act at the federal levels, and potentially ancillary RICO or conspiracy charges.

And then you always have the tax and RICO charges that are routinely included, and which also enable more viable extradition proceedings because they typically satisfy the dual criminality threshold for extradition, even from jurisdictions that have a regulated gaming framework.

Allow me to conclude simply with a quote from Lynne Truss’ brilliant punctuation manifesto Eats, Shoots & Leaves: “The rule is: don’t use commas like a stupid person. I mean it.”