Home / Business / What the DOJ’s reversal on the Wire Act really means. (Answer: The Barton Bill) 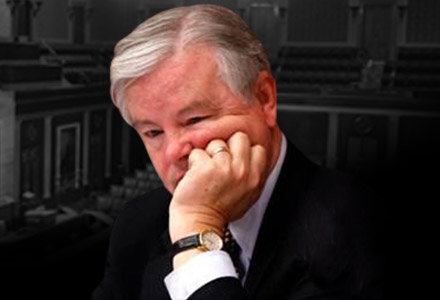 The U.S. Department of Justice (DOJ) recently surprised everyone with a written legal opinion on the meaning of the Wire Act. It was a surprise because the DOJ has been saying for years that the Wire Act prohibits all forms of online gambling, including poker. This is what it has been telling the major U.S. banks in its war against online poker, while “asking” them to block online deposits. But it now says that the Wire Act only applies to sports betting. Why the reversal?

After all, the words of the Wire Act are not inscrutable. It simply makes it illegal to place electronic bets “on any sporting event or contest.” See 18 U.S.C. 1084(a). So how is it that the DOJ suddenly became literate enough to read these words?

At the same time, it was pressuring the banks to block online poker deposits, the DOJ surely knew that the federal courts have ruled that the Wire Act only applies to sports betting and that poker is not a sporting event. All of a sudden it finds religion right before Christmas by finally admitting what it knows to be true?

The DOJ also must know that the related Unlawful Internet Gambling Enforcement Act – the dreaded UIGEA – is probably too vague to be successfully used to convict anyone of a crime. This is why the pending Black Friday indictments are based mainly on money laundering and bank fraud charges.

As part of its war of fear against online poker, the DOJ threw the much-feared UIGEA into the Black Friday indictments to confuse and intimidate both offshore websites and online poker players, placing great emphasis on the UIGEA in its press release. But the DOJ arranged things so it would not have to turn over its real hand. The Black Friday indictments will not be decided based on the UIGEA. Instead, the defendants are pleading guilty to conspiracy and bank fraud charges. In recently accepting a plea deal on those charges, Brent Buckley, co-founder of Absolute Poker, told the judge: “I knew it was illegal to deceive the banks.” The Denver Post, December 21, 2011 at 11B.

It is in this context that the DOJ suddenly reverses itself on the very meaning of the Wire Act. This is a significant legal event. It has significance not just for the Wire Act, but also for the UIGEA. This is because the UIGEA relies on and references the Wire Act definition of unlawful online gambling. One refers to the other, so the two laws are interrelated.

So what is behind the recent DOJ reversal on the Wire Act? Has the DOJ abandoned its war on online poker?

This brings us to the Barton Bill.

The answer to all these questions may be a simple one. If the currently pending Barton Bill becomes law, the DOJ no longer has to rely on the Wire Act or the UIGEA to shut down all offshore gambling and poker sites in the U.S. Thus the DOJ’s reversal on the meaning of the Wire Act probably reflects its belief that the Barton Bill (or similar federal legislation) will become law in 2012.

The DOJ’s goal is too shut down all offshore gambling and poker websites operating in the U.S. If the Barton Bill becomes law, the DOJ doesn’t need the Wire Act or the UIGEA as currently written. The Barton Bill makes these two existing laws obsolete and gives the DOJ the law it needs to shut down all the remaining offshore poker websites that still accept U.S. players.

The Barton Bill “strengthens” the UIGEA. This “strengthening” is reflected in the very title of the Barton Bill: “The Internet Gambling Prohibition, Poker Consumer Protection, and Strengthening UIGEA Act of 2011.” (Emphasis added).

The Barton Bill strengthens the UIGEA with a much broader definition of unlawful online gambling than the Wire Act or the current UIGEA. It defines “internet poker” as a form of “unlawful internet gambling” and would make internet poker illegal without a U.S. license. Unlike the vaguely worded UIGEA, this is fairly clear and enforceable.

There is more. The Barton Bill requires the government to create and maintain a list of all offshore gambling and poker websites targeted for shutdown. And given the broader and clearer definition of illegal gambling in the Barton Bill, there would no longer be any significant legal doubt that those offshore sites are illegal under U.S. law.

At the same time it shuts down all unlicensed offshore sites, the Barton Bill would authorize any U.S. state or Indian tribe to issue online poker licenses. The licenses, however, are quite restrictive.

The Barton Bill only allows licensed operators to accept bets from players located in the U. S. This isolates U.S. poker players from international play. While offshore sites like PokerStars would be eligible for a U.S. license, the Barton Bill prohibits them from accepting bets from any non-U.S. players. To operate in the U.S., offshore sites would therefore have to offer entirely separate poker games just for U.S. players.

This is a relatively small online poker market. PokerStars only lost 28% of its total worldwide market as a result of Black Friday. Since the entire U.S. online poker market is much smaller than the rest of the World, this means fewer online games, fewer players and less variety of games if the Barton Bill becomes law.

But because of other restrictions in the Barton Bill, the numbers of online U.S. players will be much smaller than you might think. The Barton Bill only allows U.S. licensed poker websites to accept bets from players located in the licensing state or in other states that permits its residents to legally play poker.

States where poker is illegal have the right under the Barton Bill to “opt-out” by forbidding its residents from playing online poker. If you live in a state that opts out, you cannot play on U.S. licensed websites, which would be required by law to block all bets from such states. All it takes for a state to opt-out is a letter from the governor saying that state residents are not allowed to play on U.S. licensed poker websites. While nobody knows how many states will opt-out, it is a fact that poker is illegal under the laws of most U.S. states.

Unfortunately, if you live in an opt-out state, you may have to move to another state that has not opted out if you want to play poker online. You would no longer have the option of playing on existing or new offshore sites, which would be shut down completely if the Barton Bill works as intended.

Under the Barton Bill, the U.S. will become like France, which only allows its players to play online at French licensed websites located in France. Some French players do play on international poker sites, but only as outlaws using proxies and virtual private networks (VPNs) to hide their IP addresses. If they get caught, however, Poker Stars and some other sites will confiscate their deposits and close their accounts. This is the future of U.S. online players if the Barton Bill becomes law. If U.S. poker players want to play internationally, we will have to become outlaws.

It seems un-American to prevent adult U.S. citizens from playing online poker with players from other nations. But this Iron Curtain of online poker will descend if the Barton Bill becomes law.

While claiming to be a friend of U.S. poker players, it is evident to knowledgeable observers that Joe Barton is really a wolf in sheep’s clothing that is suckering poker players. See “Poker and Joe Barton,” I. Nelson Rose, Poker Player Newspaper Online (Dec. 12, 2011). After all, Barton voted for the UIGEA and now wants to “strengthen” it.

Is the Poker Players Association (PPA) a sucker? It likes Joe Barton and supports the Barton Bill, believing it is the best it can get. But its commitment to the Barton Bill will eventually hurt most online poker players. I currently play online poker on a variety of websites that accept U.S. players and I don’t want the PPA and the Barton Bill to take that away from me.

With a copy of the DOJ’s written reversal on the meaning of the Wire Act in its hand, the PPA should declare victory in the online poker war. It should also abandon its support of the Barton Bill and urge U.S. poker players to return to online play. If it does this, currently existing online poker sites will have more players and better games. And more and better poker sites will likely arise to fill the hole in the online poker market left by Black Friday.

Because of its recent reversal on the Wire Act, which the UIGEA largely depends on to define what is illegal under federal gambling law, the DOJ needs the Barton Bill. But poker players no longer need it and should oppose it.

Preston Oade is a partner in the Denver law firm of Holme Roberts and Owen, LLC., www.hro.com. He litigates the meaning of federal statutes in the federal courts and has successfully argued federal statutory and constitutional cases before the U.S. Supreme Court.

Preston Oade, J.D., a partner in the Denver law firm of Holme Roberts and Owen, LLC, submitted the following editorial. If you would like to submit an editorial to be featured on CalvinAyre.com, please contact the editor.