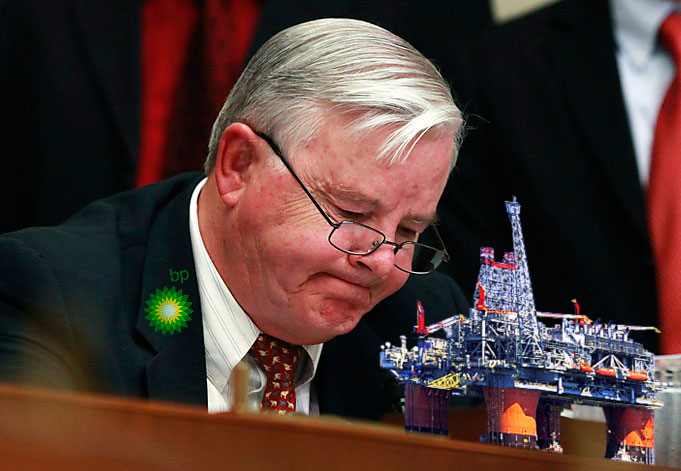 It’s amazing how a person’s media profile can change in just a year. Joe Barton has done a complete 180 in the eyes of many Americans, particularly poker players. If you remember, it was just 53 weeks ago the Texas Republican stood up at the congressional hearings investigating the BP oil spill and environmental disaster and Joe Barton apologized to British Petroleum for having to sit and answer for their destruction of the US Gulf Coast.

Fast forward to Friday and Joe Barton is riding high among the poker playing public after he released his Internet Gambling Prohibition, Poker Consumer Protection, and Strengthening UIGEA Act of 2011 otherwise known as H.R. 2366. He will be at the World Series of Poker on Saturday to make the “Shuffle up and Deal!” announcement to kick off the day’s event.

We recently talked about Jim McDermott’s crushing tax bill for online poker and in a rather unusual twist, Barton’s bill did not make any reference to taxes on operators. It could mean a marriage between the two bills in the coming weeks and months.

Let’s look at BP Joe Barton’s H.R. 2366 Online Poker Act of 2011 as it sits right now, the details are likely to change, tighten up, get stomped on, cut, pasted and run through all of the sausage making techniques that go in to pushing a bill through congress.

The first thing we’ll point out as it’s something Barton has been pushing for a while now, is that the bill implicitly states poker is a game of skill in an effort to separate it from other games at the casino.

Poker Players must be 21 to play, which is typical as Americans need to be 21 to enter a brick and mortar casino.

The bill calls for a master self-exclusion list to assist the opting-out of self-identified problem gamblers.

No credit cards can be used to make deposits into the licensed poker sites. I guess the government is concerned about chargebacks.

The bill also makes it a criminal act to use poker bots, so you have to play the cards you’re dealt.

As the BP Joe’s H.R. 2366 pertains to operators, it makes it expressly illegal to operate an inter-state Internet gambling facility (including poker) without a state or tribal license issued under the Act. The penalty for doing so can cost you up to five years in prison.

H.R. 2366, like the Harry Reid Poker Bill, calls for the creation of a federal agency under the Department of Commerce called the Office of Internet Poker Oversight. This agency would then have the power to approve of state regulators to then issue inter-state internet poker licenses.

This draft of BP Joe’s bill suggests that potential operators will need to apply for licenses in the state where the gaming servers will reside.

There is an opt-out option for states that do not wish to participate in interstate poker, thus limiting their particular state from another states poker operation. States will need to provide 60 days notice that they intend to opt-out; the bill leaves the onus on the state and the OIPO to enforce the restrictions on the licensees.

States will have different levels of opting out, first they can do an outright opt-out and the bill leaves room for states to add their own limitations. These limitations could be anything from various age restrictions, cash deposits or even time of play restrictions on players.

The licenses issued to the operators will be good for five years.

Before you think about applying for a license, H.R. 2366 has some heavy restrictions on who is eligible to apply for an online poker license. Basically, unless you’re currently a large American casino operation, you’ll have to wait at least two years before you can throw your hat into the poker arena.

Licenses may only be granted to a casino, race trace or qualified card room or their owners provided that they owned it ten days before the Act comes into force and at least five years prior to their date of application for a license.

It doesn’t look good for internationally licensed and European publically traded companies as the H.R. 2366 won’t make changes to the eligibility list for 2 year after the first license is issued. That should send Euro gaming share prices even lower on Monday as it pushes back any possible entry into the US for 3 or potentially 4 years depending on how long it takes this bill to pass.

The heavy restrictions aren’t just limited to potential operators, the bill calls for “significant vendors” to obtain a “certificate of suitability” from the state agency.

A significant vendor is anyone who provides software, administers or controls hardware, provides information or a database gathered by a foreign operator, provides any products services and paid a percentage of gaming revenue or rake, etc. Other vendors may have to jump through the regulatory hoops but it will be at the discretion of the state.

It looks like it may not take much to be deemed unsuitable to even do business with the licensees. You would need to be subject to a state evaluation and you will be barred from doing business if you fail to provide requested information or if you provide false or misleading information.

Also if you’ve been convicted of an offence punishable by imprisonment of more than 1 year, notice that this doesn’t mean you’ve been imprisoned for one year, you would be unfit. If you are delinquent on taxes or do not submit to personal jurisdiction of the US, you’re on the outside looking in.

Ok are you still with us. The current Barton Poker Bill draft is 101 pages so they were fairly through with what was covered and what is not covered in the bill. Joe Barton and his team of lobbyists intended to remove any grey areas in the law.

Speaking of grey areas, H.R. 2366 looks to tighten up the UIGEA with a few new amendments to the Unlawful Internet Gambling Enforcement Act.
The UIGEA will be amended to create a list of ineligible enterprises that will be updated every 60 days.

The list will be provided to financial institutions and administered by Financial Crimes Enforcement Network. The list will contain web addresses and the names of anyone who controls, manages, supervises, directs or owns all or part of the enterprise, financial agents, and account numbers of each of those people.

The Director of FinCEN is required to initiate investigations into all such businesses and individuals. The enterprises will be notified of their impending addition to the list. There will be an appeal process where those added to the list can contest the addition within 30 days of their inclusion. If you or your company make the list, you are automatically guilty until you can prove otherwise.

Once a company is added to the ineligible list, any transaction with anyone on the list by a US bank will be deemed to have known to have conducted transactions with an unlicensed gaming operator.

There you go. BP Joe Barton’s 101 pages of H.R. 2366 cut down to a couple of pages. This bill has all the hallmarks of a Las Vegas Casino lobby bill. It bans foreign companies; it makes it nearly impossible for any company that’s not already running a large scale land based poker operation from obtaining a licence for well over two years.

BP Joe Barton isn’t afraid of lobby money and it looks like Mitch Garber and Caesars have spent their lobby backing Barton’s efforts.

American poker players deserve the choice to play with internationally licensed operators who have been doing online poker successfully for years and not be forced to further line the pockets of Las Vegas corporations and their lobbyists.

We’ll continue to cover this latest attempt to regulate and tax online poker in the US and the multitudes of others that come up in the future.