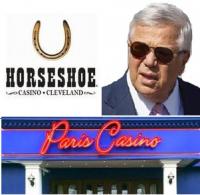 It was less than a month ago when London saw the opening of Britain’s largest casino – Aspers, at Westfield Stratford City – which thrashed predictions, launching with four times as many visitors than expected in its opening weekend. But further up north in Blackpool, casino opening hasn’t gone quite as swimmingly.

The re-opening of the new Paris Casino was set to take place tomorrow night; however, the date has been postponed because its owner was run over by a bus on Christmas eve – exactly two years after the original casino burnt to the ground. Creepy.

Pierre Coulon was struck by a bus on Bloomfield Road when he was crossing the Promenade outside Blackpool’s new seafront wedding chapel – Festival House – at 9.25pm, The Blackpool Gazette reported.  Suffering a back injury, as well as the expected cuts and bruises, the incident is yet another stroke of bad luck for Coulon, who suffered the loss of the first Paris Casino on Station Road, South Blackpool when it burnt down in January 2009. And they say bad luck comes in threes, let’s hope they’re wrong!

The casino opening has been postponed until further notice.

In other casino news, Ohio is due to see its first casino come March, it has been revealed, after voters approved the first of four on their way in Cleveland.

The first gambling arena to open in the state – The Horseshoe Casino Cleveland – will operate on four floors of a department store overlooking Public Square, downtown, Associated Press reported.

The casino will also have 2,000 or more slot machines, dozens of table games and a 30-table poker room. Instead of tacky entertainment, the venue will provide amenities by connecting with downtown Cleveland attractions such as Cleveland based sports teams, Rock and Roll Hall of Fame and its theatre scene, said its manager, Marcus Glover.

Casino news this week has also seen an update on the Kraft and Wynn casino deal.

Local leaders of Foxborough have scheduled a debate for the proposed billion dollar gambling resort for tomorrow night, FoxnewsBoston has reported.

The town selectmen will be discussing the proposed casino that Patriots owner Robert Kraft and Las Vegas mogul Steve Wynn want to build on Route 1, and have even asked Wynn himself to appear next month to present his initial design plans.

However, many Foxborough residents are against the idea. But there’s always some isn’t there? According to the report, some want a public referendum on gambling before the board considers any specific casino plan. What do you think? Should it be put to a referendum?