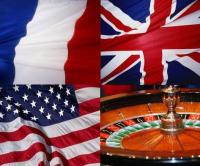 Isn’t it strange when a gambler blames everyone but themselves for their own stupidity? Especially when they try to sue the government for letting them get too carried away. It might sound ridiculous, but it happens, and it’s happening in France. Yep, a French casino gambler is doing just that; suing the government for 100,000 euros ($133,000) because “it failed to prevent him” from accessing casinos and online poker sites his lawyer said on Monday. Dude, is it really the government’s fault?

In a report by AFP, the plaintiff’s lawyer, Emmanuel Ludot, said the 37-year-old man from the city of Reims is suing after he registered with the interior ministry last year to be voluntarily banned from casinos and online gambling sites, but was still able to access them. He added that the ministry registered the man, whose identity was not released, under the wrong address when he asked to be banned, “which allowed him to continue playing”. At the end of the day, you’re responsible for your own actions. We don’t tell the government to put us on a list to ban us from eating cake when we’re on a diet – if we’re fat that’s out own fault.

The interior ministry refused to comment on the case because legal proceedings were under way. But is suing the government for making your own mistakes acceptable?

Over the English Channel, there’s news that an amended plan to convert a former National Union of Mineworkers (NUM) headquarters in Sheffield city centre into a 24-hour casino with bars and restaurants is set to be approved by council officials next week.

In a report by the Yorkshire Post, the proposals for the ’80s block next to Sheffield City Hall in Barker’s Pool have been put forward by Brook Leisure – who already operates a nightclub in the area – which says the new complex could create 130 jobs.

A meeting next Monday regarding planning permission will decide the final outcome. In the report set to go before the meeting, city planners described the NUM site as a “substantial and striking post-modern building, which makes reference to the neighbouring City Hall with its extensive use of stone and angular pillars.” Sounds pretty arty – any guesses what it might be called?

Speaking of new casino openings, across the pond in Cleveland, US, the new Horseshoe Casino Cleveland is scheduled to open come January and has begun accepting applications for over 750 new casino jobs.

In a report by ABC Channel 5 News Gina Morris of Downtown Cleveland Alliance, said: “A lot of the opportunities with the casino are administrative, which means people are going to be there from 9 to 5.”

The full-fledged Las Vegas-style casino will be located downtown on four floors of the former Higbee Department Store, the place where Ralphie asked Santa for a Red Ryder BB gun in the movie “A Christmas Story.” Remember that? Nah, neither do we.