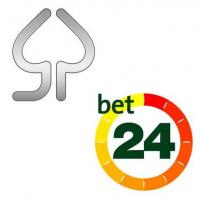 Since allowing players to play with the controversial Bitcoin virtual currency last month, Switch Poker has developed the flash-free Android app – compatible with Android operation systems 1.6 and up – to allow players to register, deposit and play online from one place.

Developer and owner of Switch Poker, Conor McCarthy, said in a press release: “We were the first company to launch a poker app for iPhone, pioneered play with Bitcoin, and now the first to allow players register, deposit and multi-table on Android devices. We aim to continue to innovate in mobile poker and give players what they want.”

The new app also has a fast and easy multi-table option which allows players to ‘swipe’ between tables.

But Swipe Poker isn’t the only company to announce a move in to the Android market. Bet24 is also one of the latest sites to offer mobile poker on the move via an Android smartphone app, the company announced today.

In a press release, Bet24 stated that their service  will only be available to players in the UK and Austria, but Denmark will soon be joining the ranks at the beginning of 2012 when new legislation comes into force on January 1st.

Bet24’s poker manager, Lars Kollind, said: “We’re certain that mobile poker is the future.  Just imagine sitting on the bus and getting the full game experience on your smartphone.  We are thrilled that Ongame is the first network offering both Android and iPhone poker clients, and we can’t wait to offer them to our players.”

The managing director of the Ongame network, of which Bet24 is part, was equally eager to tell the world about the launch.  David Pittel said: “Enormous possibilities open up now that poker is a game that players can take with them anywhere.  Everyone recognizes that mobile poker is the future, and we expect to integrate many more of our partners over the coming months.”

iPhone users can also get their grubby hands on the app, directly from the Apple app store. Android users will need to head to the site of Bet24 itself to download their version, however. Why are things just made so much easier for Apple users?