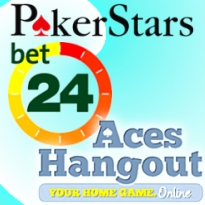 As part of its ongoing “Hey, look! We’re ten years old!” festivities, PokerStars has launched a corporate blog. (Wake up, dammit!) Sure, reading a corporate blog sounds about as much fun as an anesthetic-free root canal, but considering the initial entry is all about the methods by which Stars separates player accounts from operating funds, we’re sure even mouth breathers will find it interesting reading (perhaps). If it helps, there are even accompanying graphics, and not just the usual shots of Stars’ supremo Isai Scheinberg swimming laps in his Olympic-sized money pool. To read Stars’ head of corporate communications Eric Hellraiser, er, Hollreiser’s list of how many machinegun-toting members of Team PokerStars are currently guarding your roll, go here.

Bwin.party is reportedly behind the latest attempt to render avatars obsolete by marrying online poker with webcams. TechCrunch.com claims that the still under development Aces Hangout will operate via the multi-person video-chat feature on Google+. So, assuming the project ever develops beyond the alpha stage, all you online degens will have to learn to develop poker faces after all. Not to mention having to put on pants.

What do you get that poker-playing friend for Christmas? Well, if your friend is both grinder and nerd (what are the odds?), then the Star Wars Poker Set is just the ticket. It includes two decks of Star Wars cards, two regular decks, 200 Star Wars chips featuring familiar likenesses of all your fave characters (Darth, Luke, Chewie, Stormtrooper #47, etc.) plus the inside of the carrying case features 72 light-emitting-diodes to make your translucent chips like a real live lightsaber. We suddenly feel a disturbance in the force… or perhaps it’s just an indescribable sadness. 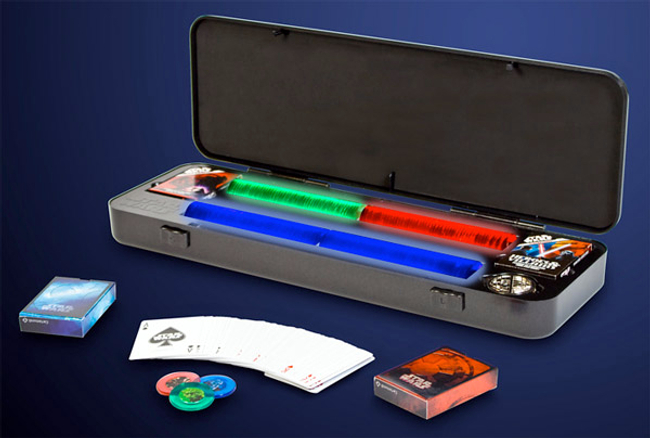