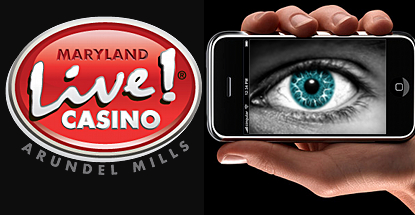 A Maryland casino worker who attempted to steal $150k from his place of employment is now safely behind bars thanks to his smartphone. Our drama started on Wednesday, when an audit at Maryland’s market-leading casino Maryland Live! revealed $150k was missing from the money room. A review of the casino’s surveillance system showed 21-year-old casino employee Willie Washington stuffing a brick of $100 bills into his shirt, then clocking out early.

Within two hours of Washington’s theft, casino staff had alerted Anne Arundel County police, who got Washington’s phone number from casino records then obtained a ‘cellphone ping order’ for Washington’s phone from his telecom provider. The telecom company was able to track Washington’s movements in real time by sending a signal to his phone and seeing which cell towers returned data.

When the cops tracked down Washington in person, they found over $34k in cash stuffed into his pants and socks. A further $100k was found in the trunk of a car of one of Washington’s buddies. The whereabouts of the other $16k has yet to be determined, but we’re betting the would-be criminal mastermind either sent it to a down-on-his-luck Nigerian prince or is waiting on delivery of his customized gold iPhone case with big ‘WW’ initials in diamonds. Washington will have a status hearing in Superior Court on July 2. Washington’s case serves as a reminder that the casino industry’s vaunted ‘eye in the sky’ can also be the eye in your back pocket.