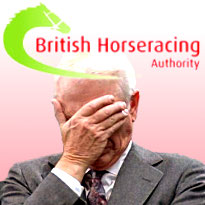 The largest investigation into race-fixing ever conducted by the British Horseracing Authority has resulted in four jockeys and two owners receiving bans from the sport of up to 14 years. The inquiry began after suspiciously large bets were placed with betting exchanges for horses to lose races at five separate tracks between Jan. 17 and Aug. 15, 2009. Following their investigation, the BHA has handed down 12-year bans from the sport for jockeys Paul Doe and Greg Fairley, who were determined to have deliberately stopped their horses from riding “to its merits.”

Two other jockeys, Kirsty Milczarek and Jimmy Quinn, received two-year and six-month bans respectively for corruption, with Milczarek earning the lengthier sentence for also being found guilty of passing on racing info in return for personal gain. Milczarek intends to appeal the decision; Quinn does not. Doe and Fairley both retired from the sport earlier this year.

Owners Maurice ‘Fred’ Sines and James Crickmore each received 14-year bans for betting on their own horses to lose. Five other ‘associates’ – Nick Gold, Peter Gold, Shaun Harris, David Kendrick and Liam Vasey — were found guilty of “corrupt or fraudulent practice” for laying bets on behalf of the two owners. Harris, Kendrick and Vasey received bans of 3-5 years, while Nick and Peter Gold’s fates will be determined following written submissions. Two other men – trainer Paul Fitzimons and Darren May – were cleared of all charges.

The corruption came to light when reps from Paddy Power and Ladbrokes alerted the BHA that Sines had contacted them, claiming to be interested in placing wagers of £25k-30k on It’s A Man’s World, a horse registered under another name but secretly owned by Sines and Crickmore. The bookmakers suspected the calls were intended to drive down the price on the horse in order to give Sines better value when laying bets on betting exchanges like Betfair. Nick Gold laid £80k on It’s A Man’s World on Sines and Crickmore’s behalf, ultimately collecting £50k profit, which was shared between Gold, Sines and Crickmore. The overall take from the 10 races under investigation amounted to nearly £280k.

BHA director of security Paul Scotney issued a statement, saying the BHA takes “no pleasure in uncovering such serious breaches of the Rules of Racing. However, the findings of the disciplinary panel vindicate the hard work of BHA’s Integrity and Compliance teams.” The UK Gambling Commission will now determine whether criminal charges against the principals are warranted.