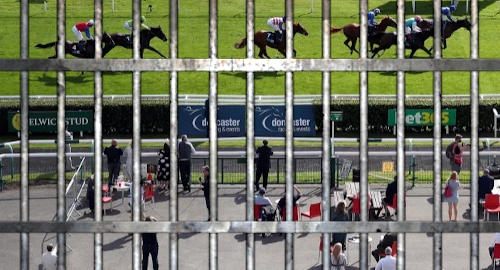 The British racing sector is being forced back ‘behind closed doors’ as the nation struggles to get its COVID-19 infection rate under control.

On Wednesday, the British government announced plans to reintroduce rules barring individuals from assembling in groups larger than six people, regardless of whether that group assembles indoors or outdoors. The restrictions will take effect on Monday (14) and will apply for “the foreseeable future,” possibly until after Christmas.

The so-called ‘rule of six’ has a few exemption s but racetracks aren’t among them. The Arena Racing Company’s Doncaster Racecourse welcomed over 2,500 guests to its grounds on Wednesday, the first day of the four-day St. Leger Festival, but the rest of the meeting will now take place with only essential personnel on hand.

Wednesday’s meeting was the first time racing fans had been let in to witness the action in person since the UK’s original pandemic lockdown took effect in March. Racing was allowed to resume on a spectator-free basis in June but the sector had hoped the Donacaster test would lead to more tracks being granted permission to resume normal activity.

The BBC quoted Mark Spincer, managing director of ARC’s racing division, saying the reversal “isn’t just a blow for racing, it’s sport. It’s going to make it slower and harder for everyone to get back.” Spincer said the lack of spectators at St. Leger will cost the company around £250k.

The British Horseracing Authority (BHA) and Racecourse Association (RCA) issued a joint statement saying they were “desperately disappointed” at the news. The statement noted that half of racecourse income comes from spectators and thus “any significant delay to the return of the public will be a hammer-blow for racecourses and the racing industry.”

The overall racing sector has suffered mightily from the lengthy suspension of meetings as well as the inability to generate revenue from on-site activity. The fiscal picture is becoming so dire that the Horseracing Betting Levy Board (HBLB) is asking bookmakers whether they might need to top up their annual Levy contributions.

UK-licensed bookies are required to kick back 10% of their race betting revenue to racing, and the HBLB announced in May that the total contribution for the 2019/20 year ending March 31 would come in around £97m. The HBLB announced Tuesday that its forecast income for the 2020/21 year would be “at least £70m,” around £5m higher than the HBLB budgeted for in May.

HBLB CEO Alan Delmonte said bookmakers’ “timely payments” since racing resumed on June 1 have given the HBLB “the confidence and the means to make significantly over and above normal contributions to racing in the initial stages of resumption.”

However, Delmonte has asked bookmakers “whether they wish to maintain their current level of payment or adjust it to reflect their own expected Levy liability for the year as a whole.” The aim is to ensure the HBLB has “a fully-formed understanding” of how much scratch will be coming in so it can consider its expenses going forward.