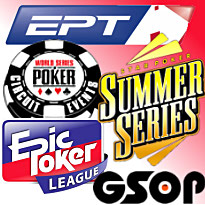 Martin Finger’s friends and relations are no doubt expecting something extra special under the tannenbaum this Xmas after the German player won the European Poker Tour Prague main event over the weekend. Finger earned a whopping €720k for outlasting his 721 opponents to take the final EPT title of 2011. Also finishing out the year strong was runner-up David Boyaciyan, who added €535k to the €382k he earned last month for winning the Master Classics of Poker. Nicholas Levi of France took third and €270k.

Elsewhere at the Prague Poker Festival, Estonian Raigo Aasmaa took the Grand Series of Poker Prague main event title. From a starting field of 500, it came down to Aasmaa and Belgium’s Roger Hairabedian, who started heads-up play with a 2:1 chip advantage over Aasmaa. But by the end, it was Aasmaa breathing the sweet smell of success and the €80k in prize money. Hairabedian settled for €70k, while Finland’s Kimmo Kurko took third and €60k.

Across the pond in Atlantic City, Tuan Phan showed 617 other players who was the boardwalk emperor at the World Series of Poker Circuit AC main event. Phan earned over $188k and his first WSOP-C gold ring for prevailing in what was the second-largest WSOP-C field of the season and the largest WSOP-C main event field ever held in the eastern seaboard’s gambling hub. In true ‘there can be only one’ fashion, Phan eliminated eight of his nine final table opponents, including runner-up Hao Le, who earned $116k, while Marc Roy finished third, collecting $85k.

Elsewhere in America, Jason Mercier earned a cool $683k at the Bellagio $100k Super High-Roller Event in Las Vegas this weekend. Mercier also earned a $25k seat at the WPT World Championship, to be held at the same venue in May 2012. A field of 29 deep-pocketed players took part in the event, including Daniel Negreanu, Ben Lamb, Erik Seidel, Sorel Mizzi and Sam Stein. However, only five players would finish in the money, and none of those big names made the cut. In the end, it was David Sands earning $619k for finishing second, Isaac Haxton in third (($582k), Justin Smith in fourth ($289k) and Roger Sippi pleading the fifth to earn $192k.

Andy Lee has triumphed at the inaugural Star Poker Summer Series main event, earning $270k for besting a 164-strong field. (If you’re wondering whether that’s a typo, it is indeed summer in the tourney’s host city of Sydney, Australia.) The field was a disappointment for the organizers, who’d guaranteed a $1m prize pool, meaning there was a $221k overlay. Tom Rafferty withstood Lee’s will to win longest, earning $170k for his second-place finish. Matviy Bilenky took $100k for finishing third.

The Asia Pacific Poker Tour will add a stop in Seoul, South Korea at the Paradise Walker-Hill Casino between March 7-11, 2012. The main event will be a KRW 3m (US $2,600) buy-in. A source at Crown Poker told PokerNews.com that the Aussie Millions intends to stage a repeat of the $250k Super High Roller event this January. The 2011 version attracted 20 participants, including eventual winner Erik Seidel, who took home a hefty $2.5m for a hard day’s work.

Finally, Doyle Brunson has been granted a “lifetime player card” by the Epic Poker League. The 78-year-old Texas Dolly had already qualified for a two-year eligibility window based on his past accomplishments on the tournament scene, but he’s yet to take part in either of the EPL’s first two events. Brunson told the Associated Press that while he appreciated the honor, he found “tournaments are getting too hard to come through … I don’t plan on playing a whole lot of tournaments the rest of my life.” Bottom line, nice gesture to a poker icon, but, given Brunson’s apparent disinterest, what’s the point, besides earning the EPL a little midweek press? Oh, right…