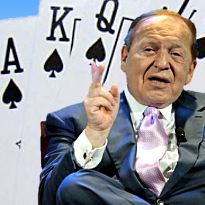 Phil Hellmuth caused quite a stir on a recent episode of Short Stacked Radio by stating “there’s going to be a bill that’s going to go through, and there’s going to be a rider attached, I believe, involving the legalization of online poker” in the United States. Hellmuth said he “wouldn’t be surprised if online poker were passed in the next five days.” For the record, he said this on the 9th, meaning today’s the day! Huzzah! Pop the champagne corks! But hold the phone… Hellmuth went on to say he also wouldn’t be surprised if US online poker legislation “passed before Feb. 1.” Uh, okay, so today’s not the day? Quick, how do you get a cork back in a bottle?

Jon Ralston of the Las Vegas Sun also caused quite a stir a week ago when he broke the news that Las Vegas Sands chairman Sheldon Adelson was ‘morally opposed’ to online poker. While Adelson’s comments – and the subsequent confirmation that Adelson had been expressing such opinions in conversations with Republican whip Sen. Jon Kyl (R-AZ) – definitely annoyed a lot of US online poker players, it must have seriously pissed off the editors of Global Gaming Business magazine, to whom Adelson had given the same quotes last month. Adelson had requested they sit on the scoop until he’d had a chance to inform American Gaming Association head Frank Fahrenkopf, but since that cork has clearly been popped, GGB has gone public with the rest of Adelson’s interview.

Anyway, outside of Adelson being “vehemently against” online poker on moral grounds, he also doesn’t think it makes good business sense. “I’m looking at the strategy of this, I just don’t get it … PokerStars is the biggest and most successful online gaming entity in the world, and the most they made in a year was $440 million. Now, how is $440 million divided up amongst several other players going to make a difference? It ain’t going far.”

Adelson claimed that European Casino Association chairman Ron Goudsmit recently informed him that online gambling had had a cannibalizing effect on the continent’s brick and mortar casinos. “I asked him if he could quantify it. He said he didn’t know exactly so I said, ‘Give me a guess. 5 percent? 10 percent?’ He said, ‘Yes.’ … How many people do we [the gaming industry] employ? Half a million people? If 10 percent of them lost their jobs, I think that would be terrible.”

Adelson is convinced online poker is a Trojan Horse that would eventually lead to the complete menu of casino games online. When that happens, “the business as we know it today will gradually diminish, and get to the point where there’s a break even; where you start losing money. And when you’re at that point, there are a lot of companies that will go out of business.”

Adelson was also keen to rubbish the suggestion that he’s some all-powerful mover and shaker, able to kill online gambling with a mere wave of his cigar in a smoke-filled room in Washington. Frankly, Adelson doesn’t think his objections are all that necessary. “Republicans fundamentally are against gambling.” This is probably a good time to get back to Hellmuth’s quote about a poker bill being attached to a larger piece of legislation. On Tuesday, the House of Representatives passed the payroll tax reduction bill that President Obama is itching to sign. Problem is, before voting, the GOP attached a provision that would require the State Department to make a decision on the controversial Keystone XL pipeline within 60 days – despite the fact that the State Dept. announced last month that it would defer any decision on the proposed pipeline until after the 2012 presidential election. Obama has announced in no uncertain terms that he will veto the bill if it comes to him with the pipeline provision attached.

Of course, the GOP attachment will be stripped away as the bill passes through the Democratic-controlled Senate. Senate Majority Leader Harry Reid (D-NV) said as much at a press conference late Tuesday night. “It was dead before it got to the Senate.” And there’s the rub. After Reid kills the GOP’s pet attachment, how do you think Senate Republicans will react if Reid attempts to attach his own pet project — an online poker bill — to an unrelated piece of legislation? If Republicans had a sense of humor, they’d send a DVD of Old Yeller to Reid’s office so he could bone up on how other people killed the pets they loved.