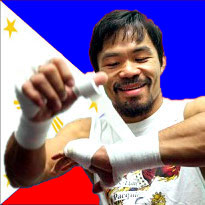 Mexican boxer Juan Manuel Marquez is contemplating retirement after losing a debatable majority decision to Filipino congressman and (still) WBO welterweight champion Manny Pacquiao. Asked whether he’d contemplate a fourth bout with Pacquiao – whose contract has a rematch clause — the 18-year veteran couldn’t answer. “Maybe I retire, maybe I don’t. It is so hard when you’re fighting against a rival and also against the three judges.” Marquez, who believes he was also robbed the last time he fought Manny, called Saturday night’s bout “the second robbery … even more clear than the first. I don’t now what else in the ring I can do to beat this guy.”

Considering he went into the fight a heavy underdog, Marquez has every right to come off like boxing’s Rodney Dangerfield. But many in attendance at the MGM Grand Garden Arena in Las Vegas – particularly the large Mexican contingent – believe Marquez has a legitimate claim to have defeated Pacquiao.

Fighting only his second bout as a welterweight, former lightweight champion Marquez looked good early. Pacquiao got off to a very slow start, which he blamed on difficulty adjusting to Marquez’ counterpunching style. Pacquiao found his rhythm in the seventh and the fight opened up, as did a cut over Manny’s right eye a few rounds later. (Manny later claimed that “[Marquez’s] headbutts hurt me.”) The 12th round is where Marquez backers cry foul. Many observers had it even, but two of the three judges gave the round to Pacquiao. Had they not, the fight would have ended in a draw. Instead, the record of the two opponents’ three fights becomes 2-0-1 in Pacquiao’s favor.

If the post-decision booing during Manny’s ring interview didn’t make it crystal clear, Marquez fans feel they wuz robbed. But viewers of this fight – regardless of allegiance – got great value for their entertainment dollar. Mixed martial arts have supposedly eclipsed the sweet science in popularity, but on this night, at least, boxing put on a 12-round thriller. Meanwhile, over at the Ultimate Fighting Championship’s debut broadcast on the Fox network, the Dos Santos v. Velasquez main event was over in 64 seconds. Afterward, CNBC’s Darren Rovell (@darrenrovell) took a non-scientific poll of his 20k followers: “If you’re a UFC newcomer, how do you feel after tonight?” The response was 46.2% less likely to watch, 32.4% more likely to watch and 21.4% need to see more. (Memo from UFC frontman Dana White to injured fighters Georges St. Pierre and Brock Lesnar: you guys can’t get healthy fast enough.)

Marquez was definitely on top of his game Saturday night, but the question remains: how off his game was Pacquiao? If you’re Floyd Mayweather Jr. – who easily handled Marquez two years ago – does this subpar performance convince you that (a) not only will fighting Manny give you a mammoth payday, but (b) it might not even be all that tough? Or [wild conspiracy theory] did Manny hold back against Marquez in order to finally lure Mayweather to get out of the Vegas sportsbooks long enough to sign a fight contract? Is Manny playing a very long game of rope a dope on Mayweather’s head? That’s right, Floyd… I’m harmless… Easy pickings… Come a little closer… little closer…

Weekly Poll: “What will be the result of Mayweather-Pacquiao Fight?”
Criz Hombrebueno
30 April 2015
.