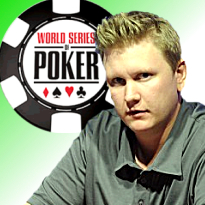 Ben Lamb has been eliminated in 3rd place at the 2011 World Series of Poker Main Event final table, earning $4m. The WSOP Player of the Year had an epic run in 2011, earning a bracelet at the $10k PLO event, placing second in a $3k PLO, final tabling the $50k Poker Players championship and finishing 12th in $10k Six-Handed NLHE. While the Hollywood ending isn’t to be, Lamb’s fifth WSOP appearance is a significant improvement over his previous best Main Event finish (14th in 2009).

The action was cutthroat from the very first hand. Lamb put his K-J all-in against Martin Staszko’s pocket sevens, but Lamb’s remarkable streak of timely divine intervention ran out when (for once) the cards didn’t come his way. Just like that, Staszko was up almost 43m chips to 85.6m and Lamb was whittled down to 12.7m. Staszko’s good fortune held on the very next hand, when his pocket kings beat Pius Heinz’s K-Q for a pot of over 20m, and just like that, we had a new chip leader. Lamb’s ouster came when his Q-6 ran up against Staszko’s pocket jacks. On Sunday, Staszko had noted that his day “would have been a lot easier if I had good cards. I hope tomorrow will be better.” Done and done.

So it comes down to an all-European affair pitting Staszko v. Heinz, with the $8.7m sitting in cash on the table. (No pressure, guys.) Staszko’s currently out front with 122m, while Heinz is sitting at 83m. Whichever man wins, it will be the first Main Event title for his respective country.