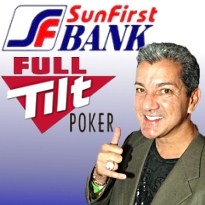 SunFirst Bank – the St. George, Utah financial institution that featured prominently in the Black Friday indictments – has been seized by state regulators. The Salt Lake Tribune reports that the Department of Financial Institutions has appointed the Federal Deposit Insurance Corp. (FDIC) as receiver. In addition to enduring the woes facing most US financial institutions since the bottom dropped out of the markets in 2008, SunFirst was also under scrutiny for its dealings with St. George philanthropist/conman Jeremy Johnson and the payment processors who convinced vice-chairman John Campos to let them make a $10m ‘investment’ in SunFirst – and $20K as a personal ‘bonus’ for Campos – in exchange for the bank processing online poker transactions on behalf of the companies indicted on Black Friday. By Sept. 30, SunFirst held capital reserves totaling only 2% of assets. Another bank has stepped in to buy most of SunFirst’s remaining assets, but the FDIC is personally hanging on to $15m “in deposits that may be subject to external litigation involving SunFirst Bank.”

Ultimate Fighting Championship ring announcer Bruce Buffer, the ‘veteran voice of the octagon’, gave a remarkably candid interview to PokerNews this week. Buffer is a familiar figure in poker circles, having won last year’s Hustler Grand Slam of Poker, had the poker room at the Luxor in Las Vegas branded with his name, and was a former ‘Friend of Full Tilt’ before FTP’s world caved in on Black Friday. Buffer told PokerNews that he had a bankroll in the “healthy five figures” stuck in limbo on FTP, although he admits that, unlike most players, he’s fortunate enough to be in the financial position where he “can take a loss” if he has to.

Also unlike most other players on FTP, Buffer was apparently given advance notice that all was not well in FTP-ville. “I actually was told, through some attorney friends of mine, like three months previous [to Black Friday], not to keep a lot of money in Full Tilt … I was a very loyal supporter because I was on the team, but they told me to take the money out because they were going to have some issues, but I couldn’t see what those issues could be, and lo and behold the issues came down and surprised us all.” This suggestion that FTP insiders were quietly divvying up the life jackets before the rest of the passengers realized the ship was taking on water isn’t likely to surprise many of FTP’s aggrieved players, but it will likely keep them ‘ready to rumble’ for a good while longer.