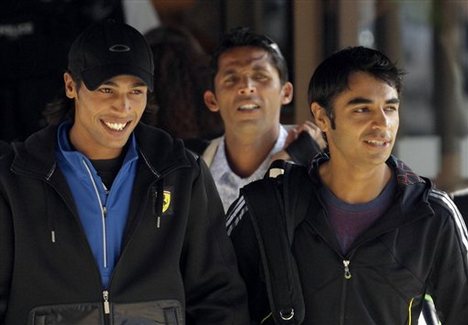 Three Pakistani cricketers are facing jail time after being found guilty of attempting to fix a game in England last summer. Mohammad Asif and Salman Butt were found guilty of conspiracy to cheat and conspiracy to accept corrupt payments. The younger defendant, Mohammad Amir, pled guilty before the trial began. Sentencing, which gets underway tomorrow, could see them receiving the maximum of seven years for conspiracy to accept corrupt payments.

Spot fixing, the offence for which the accused were brought to court involves punters staking money on extremely specific events. It can be anything from the time of the first throw-in or corner in football to the no balls being bet on here. It’s when players are asked, on the rare occasion, to influence this that the trouble starts.

Defunct and disgraced newspaper the News of the World was the first to uncover the “spot fixing” following the test last August. The accusations centered on Amir and Asif bowling three no balls at certain points during the fourth test between England and Pakistan. Amir’s lawyer is leaning on the fact that he’s a mere kid of 18 to explain why he was duped into the act. I’m pretty sure when I was 18 I’d have realized that bowling a no ball and receiving money for it was probably wrong…

Not only does this bring the sport of cricket into disrepute, it also goes to show why the government’s attitude towards the sports betting industry in the cricket-mad nations of Pakistan and India could be better. All that banning the practice has done is to drive the money into the hands of unregulated bookmakers and ultimately opening up the chance that organized crime figures will use it as an opportunity. There is still no excuse whatsoever for what these three have done and life bans will be the least of their worries with sentencing imminent.

It’s the first time that anyone has been convicted of the offence under the Gambling Act 2005 and goes to show that on the whole, match fixing in connection to the gambling industry is rare. Reputable betting companies have a plethora of anti-corruption systems in place to prevent this from happening. It continues to ram home the fact that unregulated markets like those in Pakistan and India are ripe for the picking when it comes to this kind of practice. You only have to look at the attempts by Scottish footballer Steve Jennings to dupe the bookies by taking an easy red card to see how difficult it is to get away with it.

For all the phone-hacking and underhand tactics they used the NOTW should rarely receive any praise. In this case an undercover sting has come up with the goods and shows that there was some good work being done.