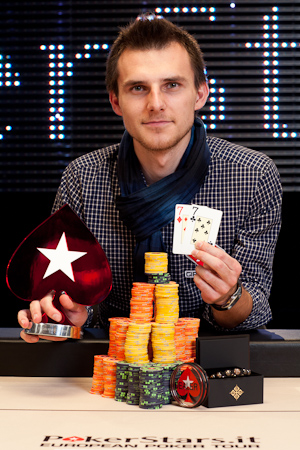 Andrey Pateychuk is the smuggest man in poker. A huge stroke of luck guaranteed him an EPT winner’s trophy at San Remo last night as the Russian took home €680,000. A mammoth heads-up with 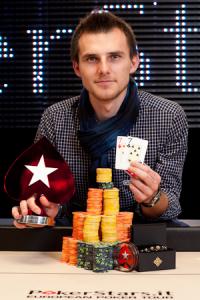 Dimitar Danchev at one stage saw him with a 5% chance of winning on what many thought was the final hand. Not tonight though. Danchev’s 10s9c looked neigh-on unbeatable against a 2h4s9s flop – especially with his opponent’s 7c6s. Then came the turn…8h. Pateychuk was hoping. Begging. Praying for a 5. What he get…5h. Demoralized Dimitar? Devastated Danchev? Any number of headlines could be attributed to this demise. Perilously (close to the end) Pateychuk might be the finest.

A little known US-live poker tour will be the first in the country to trial a revolutionary new table. The Mid States Poker Tour (MSPT) hopes to try out the RFID (Radio Frequency Identification) table at the Grand Casino Mille Lacs event from November 12-20. If it doesn’t arrive in time it will definitely be on show at Canterbury Park from December 7-12.

The system works by using normal cards with the sole difference that they’re embedded with RFID chips. Readers are built into the wood of the table and this communicates with software. It then generates the card graphics you’ve come to know when watching live poker on ESPN. If nothing else it will mean that people actually start to watch the MSPT in large numbers (streaming available here www.msptpoker.com)

The technology got its debut at the Genting Poker Players Championship at the end of June. Now that it’s in the USA the new technology is past the first tentative steps and is even wearing diapers. Still confused as to what it’s all about? That’s what YouTube is for…

The good, the bad and the ugly of personal RFID chip implants
Erik Gibbs
30 December 2020