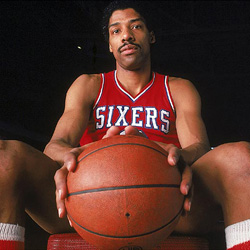 ’70s basketball legend Dr J has been filed with a lawsuit after failing to pay an outstanding loan. Hoops!

According to Fulton Superior Court, the lawsuit was filed on October 18 by Georgia Primary Bank because the doctor – who is more formally known as Julius Erving – and his corporation, The Erving Group Inc. of Atlanta, owes them more than $200,000.

Funnily enough, SCP Auctions said on Tuesday that many of Dr J’s prized possessions including basketball memorabilia items, such as his 1983 Philadelphia 76ers World Championship ring, will be up for bidding on Friday. Hmm, we can only wonder why he would do such a thing. Other items on the auction block include Erving’s ABA championship rings from 1974 and 1976 with the New York Nets, MVP trophies from both the NBA and the ABA, and many a jersey. So if your a massive fan – here’s your chance to prove your loyalty – while at the same time, doing your good deed for the day (digging him out of a hole).

According to the suit, here’s how he got himself into the mess:

Dr J has 30 days from the day he is served to answer the lawsuit. The attorney representing the bank, Ray Smith, told the AJC that by Tuesday afternoon, Dr J had not yet responded to the suit. Smith also said that calls to Dr J’s attorney on Tuesday were not returned. It’s no use burying your basketball in the sand, Doc.

Things aren’t looking too good for Dr. J who moved to the Atlanta area in 2008 – about two years after purchasing the Heritage Golf Club near the Gwinnett-DeKalb county line. We should have seen this coming, the golf club has been in foreclosure since April last year. Perhaps he should have stuck to bouncing those big brown balls as opposed to whacking the small white hard ones?

Nevertheless, the auction house that will be hosting Dr J’s beloved belongings said the minimum bid is $25,000 for the NBA championship ring, and $20,000 for each ABA title ring and the NBA MVP trophy. For his sake, let’s hope they manage to at least triple that amount. Or he’s screwed. In a statement released by the auction house, the Basketball Hall of Fame member said he plans to donate a portion of the auction proceeds to  The Salvation Army. Forget about charity for now doc, and maybe consider yourself as one. Is he heading down the dark road of bankruptcy? Let’s see him dribble his way out of this one…