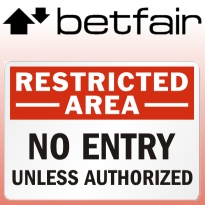 Betfair held its Annual General Meeting on Thursday, at which co-founder/chairman Ed Wray announced his imminent departure (once a suitable replacement candidate has been selected and given an appropriate training stint as deputy chairman before taking the reins).

Wray shouldn’t have too much trouble finding his way out of Betfair, with a well-worn path having recently been laid by CEO David Yu; chief product and services officer Mathias Entemann; head of mobile Charlie Palmer; director of architecture, research and prototyping Matt Carter; director of UK sports and gaming Lee Cowles; director of European and public affairs Tim Phillips; CEO of LMAX (Betfair’s troubled financial betting exchange spin-off) Robin Osmond; and CEO of Betfair Australia, Andrew Twaits. Is it bad form to remind shareholders that one of the company’s key rationales for going public was that doing so would “assist in the incentivization and retention of key management and employees?”

With Betfair execs making for the exits like Billy Zane rushing for a seat in a Titanic lifeboat, the markets exhibited a healthy skepticism toward the company’s immediate future. Betfair shares fell almost 60p on Thursday (-7.63%), a percentage loss twice that suffered by the FTSE 250 index (-3.68%), and also twice as much as the day’s second biggest gaming industry loser, William Hill (-3.75%). Despite the executive exodus and some brutal Q1 numbers, Wray claimed the company was looking at the coming financial year “with confidence and a strategy that will cement our position as the leading online betting operator.”

Let’s hope Wray’s replacement has the confidence to allow greater transparency in the company’s activities. The Guardian’s Simon Goodley was denied entry into Thursday’s AGM, apparently because Wray had barred all media. Goodley duly informed the gatekeepers that he wasn’t just a journalist, but also a shareholder – having purchased five shares in Betfair on Monday in preparation for the AGM. As such, Goodley was carrying a proxy voting form and a letter confirming his eligibility to attend the AGM. Betfair legal eagle Martin Cruddace proceeded to apply some verbal jujitsu on Goodley by explaining that, shareholder or not, the AGM was solely for, er, shareholders. (Confused? Then our work here is done.) Goodley’s woes appear even more comical when contrasted with Wray’s AGM comment that he “would like to welcome our new shareholders.” (We guess he really meant to say new shareholders.) When pressed as to what the company had to hide, Wray declared “Absolutely nothing.” Nothing, that is, except hundreds of million of pounds of evaporated shareholder value?