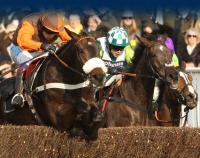 Any new deal may hinge on whether the course decides to sell the races in the lead up to the festival as part of a “road to Cheltenham” series. Check back here on the tablog for any news on the negotiation of a new deal.

Ladbrokes has announced two new supply agreements that will work alongside their deal with Microgaming. eGaming Review reports that the arrangements with both Blueprint Gaming and Ash Gaming will create the “broadest portfolio of games ever offered by the bookmaker.” It will mainly be slot games that the two provide including Alice’s Wonderland, Midas Millions, Viz, Bejeweled 2 and Casper. Sid the Sexist is a welcome addition to any website.

Sportech has become the latest to launch an iGaming affiliate program powered by Income Access. Vernons.com, Littlewoods Gaming and The Football Pools will all benefit from the program. Those promoting the program’s inaugural brand, Vernons, are entitled to 50% commissions on player revenues until 2012. After that the standard commission will decrease back down to 35% on poker and casino business. In the coming months they will launch the Littlewoods Gaming programme with The Football Pools also expected in the near future.