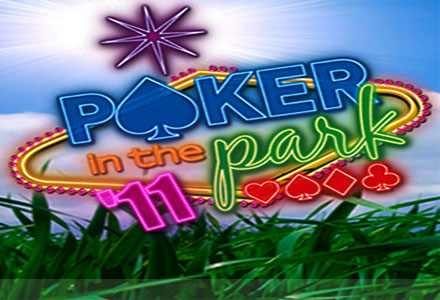 As the end of the summer draws to a close, London turns itself into a poker-haven for two days. We caught up with Lyceum’s Ed Whittington ahead of this weekend’s Poker in the Park festival.

1. Why did you choose to move this year’s event to Hanover Square?

Traditionally, Poker in the Park has been held at Leicester Square, which is currently being refurbished in preparation for the 2012 Olympics, so it wasn’t an option. Hanover Square was the obvious choice because of its similar size and central location. It’s a stone’s throw from Oxford Street which is London’s shopping district so it’s in a lively, energetic part of town.

2. What was the main motivating factor behind adding a Main Stage?

We wanted to add a more eclectic mix of entertainment, and having a main stage allows us to offer live music, which will really add to the festival vibe.

3. Has the line-up for the Main Stage been finalized?

Yes, we have the Swinging Little Big Band http://www.littlebigband.co.uk/, which is one of the UK’s most exciting live acts. They’ll be belting out Rat Pack style jazz with a unique modern twist. We have a bunch of magicians and “card ninjas” wowing the crowds with their card manipulation. We’ll also have chess experts Malcolm Pein and Simon Williams, International Master and Grand Master, respectively, showcasing their speed chess skills and taking on multiple players at once. Festival goers will also have the chance to play heads up against celebrity poker players.

The main stage will also host the British Poker Awards, an awards ceremony to honour the movers and shakers of the UK poker scene in a year when British players have truly excelled on the world stage. That’ll be at 3pm on the Saturday.

4. Apart from the new location and main stage, what else has changed since last year?

Like we said, there’s much more of an eclectic mix to the festival, which is why we’ve introduced a lot more skill gaming, as opposed to just poker. There will be rummy, chess, backgammon and Mah-jong as well. We think there’s a big crossover. If you don’t know how to play these games, there are people who will teach you, and if you’re a dab hand, you can come down and pit your wits against some real experts. We’re also looking to put on Europe’s biggest ever Mah-jong tournament, which should be fun.

And importantly, we have an alcohol license and a full-stocked bar this year, so there’s no need to ever leave the festival.

5. How many visitors do you hope to see over the course of the weekend?

Last year we had 20,000 visitors and we expect a similar amount this year. We’ve teamed up with the all the amateur poker leagues all across the UK and they are all coming down to play against each other in the Poker Domes. So we’re expecting people from all over the nation. Beyond that, we have people coming from the US, India and all over Europe, just for this event.

6. What kind of an atmosphere should attendees expect?

Poker can be a game of brutal one-upmanship, but at Poker in the Park, it’s just about chilling out and having fun. That’s it in a nutshell, really.

7. What is on offer for people that decide to attend?

As well as live SNGs running around the clock, visitors can expect free strategy lectures from some of the world’s top players, autograph signings, heads-up tournaments, cut price deals on the latest books and merchandise, surprise celebrity guests, music, entertainment…

8. We know that admission is free in but is there anything else that is free of charge?

Yes, they say you have to pay for a poker education, but we’re giving it away free. This is the only opportunity you’ll ever get to receive free tuition from some of the best players in the country.

9. Which notable poker players and gaming industry personalities can we expect to see?

From the poker world we’ll have people like Neil Channing, Sam Trickett, Jake Cody, James Mitchell, Roland de Wolfe, Paul Zimbler and loads more – they’ll all be found in the lecture tents offering that invaluable advice we just spoke about. And in terms of gaming industry personalities – well, this is a Michael Caselli production, so anyone who’s anyone will be there.

10. The festival itself finishes at 21:30 on both days. Knowing the gaming industry like we do, what is on offer for those that want to carry on the festivities into the night?

There’ll be loads of parties. London is our oyster! More details to come soon.