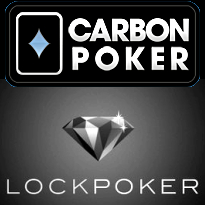 Carbon Poker has announced plans to end its self-imposed hiatus from accepting new US players before the end of August. Like other US-facing skins on the Merge Gaming Network, Carbon found itself overwhelmed by a sudden influx of liquidity following the decisions by PokerStars, Full Tilt and the Cereus Network to quit the US market following Black Friday. But Carbon appears to have cleared out the eCom backlog (for the moment) and are now warming up their vocal cords for a rousing rendition of God Bless America.

In less positive Merge news, an alleged bot ring has been exposed on the network. A player named KingOfAces posted stats on the 2+2 online poker forums that showed around a half-dozen UK-based heads-up players had exhibited eerily similar playing/betting patterns and log-in/off times. Shortly after the original post was made, the suspicious players vanished from the network. A Merge spokesperson eventually announced that the accounts in question had been suspended and that an investigation was underway.

Another Merge skin, Lock Poker, has endured sustained criticism over its handling of the José ‘Girah’ Macedo online poker cheating scandal. While Lock was quick to dump Macedo from its roster of Lock Pros, 2+2 forum posters are still trying to figure out how the audit Lock claims to have conducted following Macedo’s multi-accounting during the Bluff/Lock Poker Challenge failed to notice the rather blatant chip dumping of $100k into Macedo’s account. The silence of the traditionally chatty Lock reps on poker forum 2+2 was, as they say, deafening. But on Thursday, Lock Poker room manager Eric Lynch announced the following:

“Lock is currently pursuing legal action against Jose so we are unable to make a substantial comment at this time. We do realize that ongoing silence can lead to people jumping to conclusions. What happened goes against the very core of our player based philosophy and we intend on exercising our legal rights in the most severe degree. We will keep you updated as things progress.”

Lock appears to be operating under the theory that the best defense is a good offense, so they’ve gone to DefCon 4 with their weapons of mass distraction. Of course, given that much of the online poker community is convinced that Macedo is merely a ghost created by the two confirmed humans involved in this scandal — Haseeb Qureshi and Daniel Cates — serving José with legal papers may prove difficult. Regardless, we’re sure Lock’s lawyers are taking this matter every bit as seriously as OJ Simpson is taking his ongoing quest to find Nicole’s real killers.