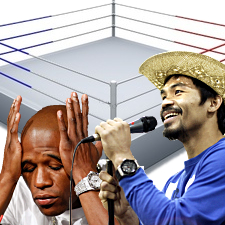 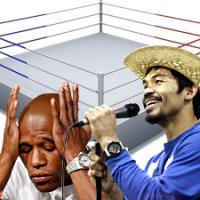 Has Floyd Money Mayweather gone gangster? That’s what two men are claiming in a lawsuit that claims Mayweather and his crew orchestrated a 2009 shooting at a Las Vegas roller rink.

A copy of the complaint was posted on the Courthouse News Service website.

According to the report, one of the members of Mayweather’s crew, Ocie Shomari Harris, was indicted last year and was charged with felony counts, including attempted murder. He’s currently awaiting trial.

It was Harris who Las Vegas Police suspected shot at the two men after they had an argument with Mayweather at the Crystal Palace Skating Center back in Aug. 23, 2009.

Nobody was actually hurt in the shooting, but the two men are claiming they’ve been psychologically damaged by the experience.

There’s only one reason to be pleased about this. If the Mayweather needs to fight this thing or pay them off, perhaps he’ll be looking for a big payday in the ring. There’s no bigger payday than a fight with Manny Pacquiao.

It seems Pacquiao may have already forgotten about Mayweather and moved on to the controversial Paris Hilton. Last week, Pacquiao presented Paris Hilton with gifts and served her with the best steak in the house during an exclusive dinner.

Pacquiao’s wife told The STAR in a text message, “We gave her Team Pacquiao shirts, Chanel makeup and lipsticks, and Manny Pacquiao figurines.”

Pacquiao figurines…Those should at least help ease the pain of Paris being one of the most hated people in America.