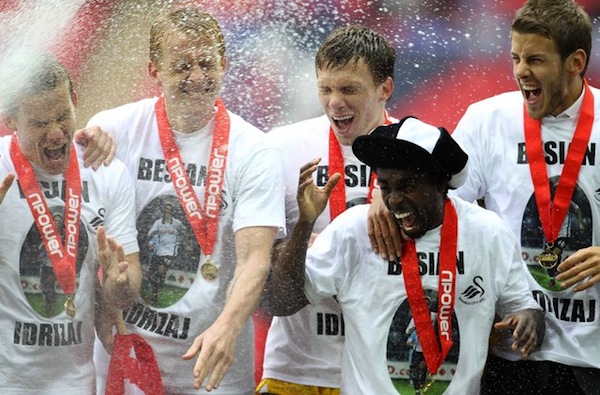 The latest in our Premier League season previews looks at promoted Swansea and last-day survivors, Wolves.

The lowdown: Out of the three promoted sides, the club from South Wales is the only one that has never been in the Premier League in its current form – and it may show. The back four have been together since the dawn of time. Behind them could be where the problems will manifest themselves. Dorus de Vries departing to join Wolves may not seem like much. José Moreira, a back up for 12 years at Benfica will either be outstanding or an aberration.

Elsewhere, boss Brendan Rodgers has spent on players who have proved their worth in the lower leagues. A lot will ride on whether record-signing Danny Graham can transfer his goal-scoring form at Watford to a new team and division. His other two major signings, Leroy Lita and Wayne Routledge, haven’t ever really hit it off with the Premier League. There’s also nothing to suggest that this will be broken here. Although the raw pace of forward Scott Sinclair will be enough to scare the shit out of some defences and should see him notch at least double figures.

Expected finish: Many won’t enjoy the trip down the M4. If it all clicks then we could see the Welsh side stay up. More than likely that they’ll opt for the trapdoor. 20th.

The lowdown: If you’d told fans of Wolverhampton Wanderers that manager Mick McCarthy would be mooted as manager of the year following two consecutive seasons of Premier League survival, they’d have probably slapped you and asked what you’d been smoking. That’s exactly what has happened though and Wolves can continue to build on a solid foundation this term. A dramatic last-day escape at home to Blackburn presented them with a third season in the top flight and they will hope that the signings brought in will hand them a fourth term.

Roger Johnson arrives as captain from Birmingham City and will bolster a defence that leaked 66 goals last season. Jamie O’Hara has arrived permanently from Tottenham Hotspur and should link well with Nenad Milijas and Karl Henry to stifle the opposition. Expectation will again be on the shoulders of young-winger Matt Jarvis as he looks to supply Kevin Doyle or Steven Fletcher with the ammunition to see the Black Country side safe.

Expected finish? The signings that Big Mick has made could mean no last day drama. That wouldn’t be Wolves though. 15th place.