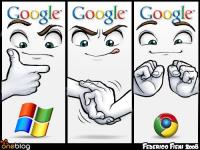 If you thought that Apple’s world domination plans involving plying everyone with tablets were impressive, then Google’s aggression puts Steve Jobs’ firm to shame. After a month in which they released their transformer to challenge the Optimus Prime of the social networking game, Facebook, their web browser has become the UK’s second favorite.

Statcounter found that for the month of July Google Chrome’s share leap to 22.12% thus surpassing the second placed browser Mozilla Firefox that only commandeered 21.65% of the market. Worldwide Chrome is number three with a 20.65% share although Statcounter fully expected them to take second from Firefox over the coming months.

Lars Bak, the Google engineer responsible for Chrome, commented, “Speed is a fundamental part of it, but it’s also about the minimal design and the way it handles security. If you as a user try [to load] a webpage and it feels snappy, it’s really hard to go back [to another browser]. It has shown that people spend more time interacting with the web.”

Top of the pile is still Microsoft’s Internet Explorer. Despite the competition, the company has been able to hold onto 45% of the UK market and a 43% share worldwide. Did we mention it’s installed on almost every new-PC worldwide? Browsers are not an area where Apple succeeds with Safari only able to boast a 9% share of the UK browser market.

Championing second position might not sound like a lot but it means that they’re now only behind Microsoft’s Internet Explorer in terms of browser preference amongst UK web users. This could be a precursor to Google also taking over the social networking space with their Google+ creation and being well on the way to a bid for the world at some point soon.