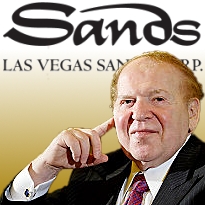 Revenue at LVS’ Venetian and Palazzo properties in Nevada rose 18.2% overall, even though gambling revenue was up a mere 2.2%. Sands Bethlehem in Pennsylvania saw its revenue rise 41.5% to $97.1m. But who’s kidding who? It’s Asia where LVS looks for growth.

Adelson noted that his company has now recorded eight consecutive quarters of increased EBITDA, and that “as the only operator with a presence in the world’s two most lucrative gaming markets — Macau and Singapore — we see absolutely no reason, no catalyst at hand which would change this upward trend. Nobody can convince me that we’ve even touched the area of saturation of the [Singapore] market. I think Singapore’s going to continue to grow and grow and grow.”

Adelson doubled down on this claim, speculating that his Singapore property, Marina Bay Sands, which has only been open for business for a year, could ultimately become the most profitable casino-resort in history. In the meantime, Marina Bay has a new CEO. George Tanasijevich had been interim CEO since January, but was officially handed the permanent gig on Monday. (Apparently, business hasn’t exactly been suffering under his watch.)

On a post-earnings conference call with investors, Adelson stated that work on the company’s new project on sites 5 and 6 on Macau’s Cotai Strip would start as scheduled in the first quarter of 2012. Adelson also took a little verbal victory lap, touting his foresight that Cotai was a good place to build, even back when “it was a swamp and a bay” and “nobody wanted the land. Now, everybody wants the land.” Including Wynn Resorts poobah Steve Wynn, whom even the notoriously combative Adelson would welcome building on Cotai, “to create some critical mass.” And hey, if those construction workers run out of bricks, they could probably find enough gold bars lying around to make do in a pinch.