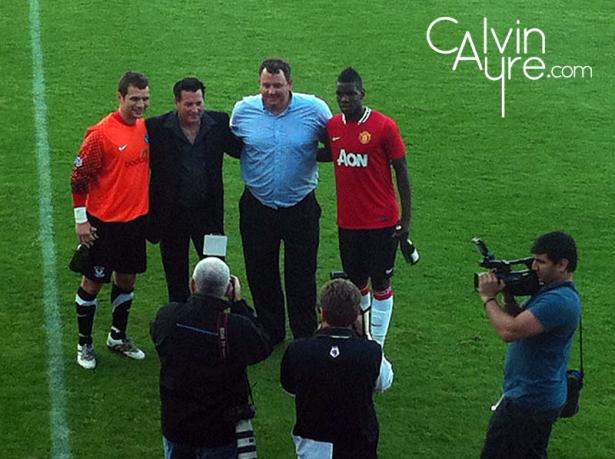 On an exceptionally beautiful day at Somerset Park in Scotland, “The Honest Men” from Ayr United and Manchester United squared off in an exciting contest. The Champions got all they could handle from spirited and skilled Ayr United side that was more than up to the challenge.

There was a certain swagger about the Ayr United side as they took the pitch, a new look too as they marched out in their stylish, Bodog branded Ayr United jerseys.

It wasn’t the first time the jerseys had been unveiled however. Calvin Ayre had held a memorable press conference before the game and the home and away Bodog branded Ayr United jerseys were featured in the form of body paint on two beautiful topless women. With the champagne flowing and a media frenzy later, there was football to be played.

Inspired and up to the challenge, Ayr United matched Manchester United in both skill and grit in a tightly contested first half, playing to a draw at the end of the first 45 minutes. After the break, the Manchester United side came out of the trap strongly and their eagerness was quickly rewarded by a 30 yard dipping shot by Oliver Norwood putting the English premier league champions up 1-0.

The Ayr United side didn’t lose heart after the goal. Ayr United fought violently after the goal and managed to contain the champs by putting in a fine performance, Ayr was truly unlucky not to get an equalizer.

Calvin Ayre had the honor of choosing the “Man of the Match” for both teams based on their play, each player was awarded with a bottle of champagne at the finish of the match. Not bad for a day’s work.

Certainly all in attendance will echo these sentiments. Well done Ayr United! It certainly was a great way to start the season!