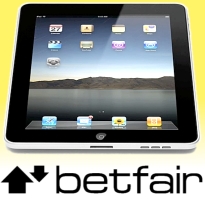 Betfair has announced updates to its mobile product range. The betting exchange’s iPhone 2.3 app now features the ability to deposit and withdraw funds to a registered card solely via mobile phone, as well as account loss and deposit limit features for those who can’t control their wagering ways. The iPad app now allows punters to place a bet while simultaneously viewing markets and their betting position. The company’s flagship mobile web app Betfair Touch has also been given a facelift via an enhanced search capacity and faster response times. Head of Mobile Product Richard Hewitt claims to be “looking forward to really growing out this key platform with more innovation over the coming year.”

But will such tweaks be sufficient to restore stock market analysts’ faith in Betfair? The company’s stock hit an all-time low of 607.5p on Monday before rallying somewhat to close out the week at 658p (barely half the company’s £13 initial public offering price last October and just 41% of its £16.10 peak). While the company saw a silver lining in the European Commission’s tut-tutting at punitive German tax proposals, the announcement of an imminent increase in UK taxation mean the dark clouds hovering over Betfair’s Hammersmith HQ won’t be clearing out anytime soon.

The Independent’s James Moore consulted a number of City analysts, none of whom expressed a great deal of confidence in Betfair’s ability to regain its lost market value. Investec’s Paul Leyland maintains his ‘sell’ rating on Betfair, even at its current bargain basement price. “I’m concerned that given their cost base it will be difficult to make money in a taxed UK environment and difficult for them to do in Europe on a regulated basis too. It’s unclear that their current business model is appropriate. Operationally they don’t have much room to maneuver and from a regulatory standpoint they are being squeezed in their most profitable markets.”

The ‘neutral’ rating offered by Evolution Securities’ James Hollins was the best of a bad lot. “The question [Betfair] have to answer is should they be spending a shed load of money chasing international expansion or whether they should focus on their UK business – which is, after all, a very good business – and take advantage of those international opportunities that do exist.”

BGC Partners’ David Buik believes that the problem is largely one of perception and suggests the company needs a replacement for outgoing CEO David Yu “with communications skills who can explain the strategy to the market and get investors back on side.” But Buik advocates going further, replacing chairman/co-founder Ed Wray (who recently demonstrated his loyalty by buying £1m worth of Betfair stock at 655.4p/share) with someone “who commands the respect of analysts to get the Betfair message across. Currently it has fallen on deaf ears.”

We’d be remiss if we didn’t point out that this quote exposes an inherent flaw of the public company model – that it’s not enough for a public company to merely make money; you also have to please the market’s tastemakers, who can build you up or bring you down based on the quality of one’s ‘messaging.’ Three-button suits are so yesterday’s news, dahling…

Betfair’s Tessa Murray responded to the piling on by stressing that the company had “made some improvements to the business” (such as adding a traditional fixed-odds wagering option, which some felt represented less of an improvement and more of an admission that the company was spinning its wheels, idea-wise). Murray also noted that Betfair was “a growing business in a growing market with no debt and £150m on our balance sheet” and that, while some international regulators may currently regard betting exchanges as one of the four horsemen of the apocalypse, things can change quickly in this business. However, unless one of those changes is Betfair taking itself private, the company will forever be on the outside looking in at the lucrative Asian betting market, meaning true growth – the kind that would satisfy investors and market analysts alike – will remain elusive.